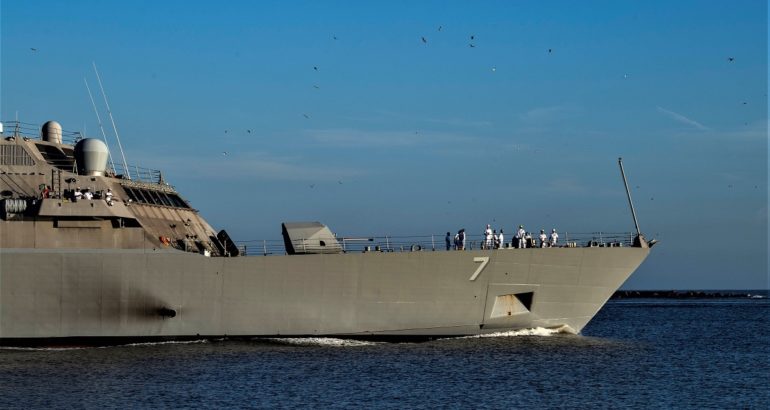 MARTILLO includes twenty partner nations committed to a regional approach against targeting illicit trafficking routes. The deployment of an LCS to the region demonstrates the U.S. commitment to regional cooperation and security.  Detroit’s shallow draft provides unparalleled opportunities for port access, making Freedom variant an ideal vessel for these types of engagements.

Homeported in Mayport, Detroit will have Blue and Gold crew rotations during the deployment. The two crews will rotate on the same hull every 4-5 months, creating a “cycle of virtue” between the crews who consistently turn the same ship over to each other, which will allow continuous presence in the region.

USS Detroit is the fourth Freedom-class LCS built by Lockheed Martin at Fincantieri’s Marinette Marine shipyard. It is the first LCS to deploy with the Longbow Hellfire missile as part of its Surface to Surface Mission Module.

Detroit was launched on 18 October 2014 and commissioned on 22 October 2016. According to Lockheed Martin, the Freedom-class LCS is a highly maneuverable, lethal and adaptable ship, designed to support focused mine countermeasures, anti-submarine warfare and surface warfare missions. It is enabled with the COMBATSS-21 Combat Management System, built from the Aegis Common Source Library, which drives commonality among the fleet. The Freedom-variant LCS integrates new technology and capability to affordably support current and future mission capability from deep water to the littorals.