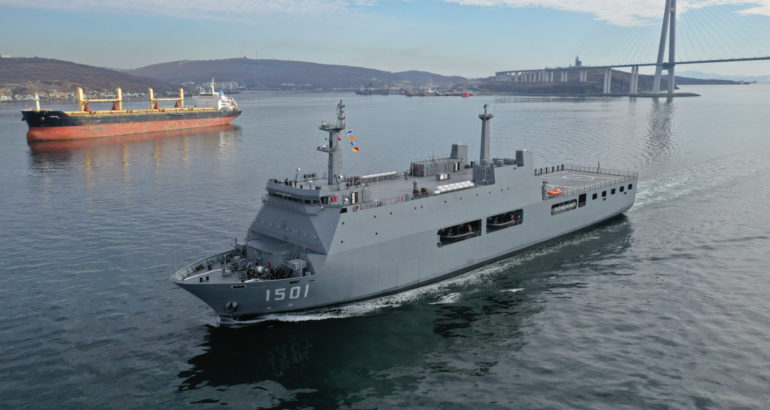 The latest addition to the Myanmar Navy fleet, a Landing Platform Dock (LPD) named Moattama, made a port of call in Vladivostok, Russia according to a local media.

The website VL.ru Novosti Vladivostok (News Vladivostok) shares many pictures of the vessel.

Myanmar’s LPD was built in South Korea by DAE SUN Shipbuilding & Engineering Co., Ltd. A contract for the Moattama was likely signed in early 2018, but the construction of the vessel for Myanmar became publicly known only after it was launched in Busan in July 2019. It was delivered in September of this year. It is making this port-of-call in Russia on its maiden voyage from South Korea, before reaching Myamar. Its design is based on the South Korean-built Makassar-class of the Indonesian Navy but is visually closer to the Tarlak-class of the Philippine Navy. A total 10 ships of this type have been built so far for the navies of Indonesia, Peru, the Philippines, and now Myanmar. The design is said to be very affordable.

The visit of a Myanmar Navy vessel to Vladivostok is a first. The purpose of the visit is to strengthen the cooperation and friendship between the sailors of both countries, as well as the exchange of experience and discussion of further cooperation.

“Hello, today we arrived in Russia and this is our very first visit. We are very pleased to be here to strengthen relations between our countries and the Armed Forces. I want to say thank you to all of you! ”

The vessel has a length of about 122 meters, a width of 22 meters for a total displacement of 11,300 tons. The vessel has an endurance of 30 days at sea and a range of 8,600 nautical miles. It is now the largest vessels in the Myanmar Navy fleet.

As any LPD, the Moattama is designed for amphibious operations, transportation of personnel as well as disaster relief and humanitarian assistance. It has a well deck and two helicopter spots + hangar.