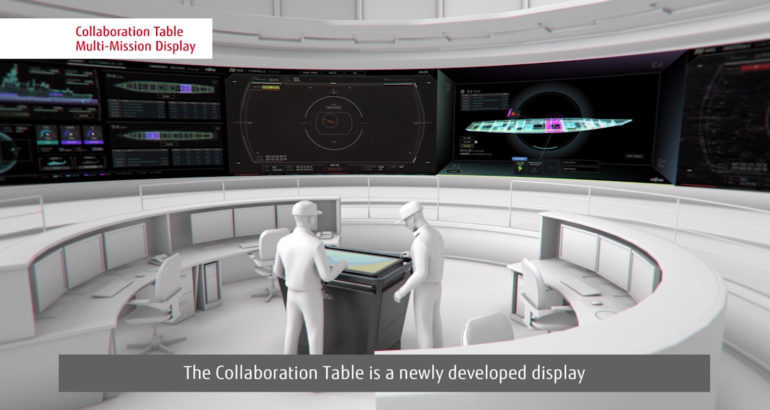 The collaborative table is a newly developed display component of the AEGIS weapon system computing infrastructure.

Intended to be placed inside the CIC, the collaborative table will allow multiple users to conduct the following tasks:

The multi-mission display provides high resolution digital image capability for use in the CIC or other shipboard-sheltered areas.

Talking to Naval News, Fujitsu representative at SNA 2020 explained that in addition to the Maya-class and AEGIS Ashore, the collaborative table will be installed aboard the Izumo-class multi-purpose destroyers (helicopter carriers) following their recently approved upgrade. The table will also aboard the 30 FFM, the next generation frigate of the JMSDF currently in production at Mitsubishi Heavy Industries. We were told that Fujitsu will provide all the displays of the impressive 360° video wall inside the CIC of the frigate.

JS Maya is the first of a new class of improved destroyers with ballistic missile defense capabilities. Her keel was laid in April 2017 and she was launched on July 30th 2018.

The new destroyer class is 170 meters long and displaces 8,200 tons. She will operate with a crew of 310 sailors, and features a combined diesel electric and gas (COGLAG) propulsion system.

The Maya-class is the first of JMSDF’s Aegis destroyers ready for ballistic missile defense operations (BMD) from the time of commissioning, and is also the first of Japan’s AEGIS fleet to be equipped with Cooperative Engagement Capability (CEC) from the start. The CEC allows the ship to receive targeting information from other assets, such as US Navy of Royal Australian Navy AEGIS destroyers or American and Japanese E-2D AWACS aircraft. Japan has four E-2D Advanced Hawkeye aircraft on order, with the first one delivered on March 29 2019 to the Japan Air Self-Defense Force.

Fitted with the AEGIS Baseline J7 combat system and the Northrop Grumman AN/SPQ-9B radar system, both JS Maya and JS Haguro destroyers will be able to fire the latest iteration of Raytheon’s SM-3 ballistic defense missile. Being jointly developed by the U.S. and Japan, the SM-3 Block IIA features larger rocket motors that will allow it to defend broader areas from ballistic missile threats and a larger kinetic warhead.