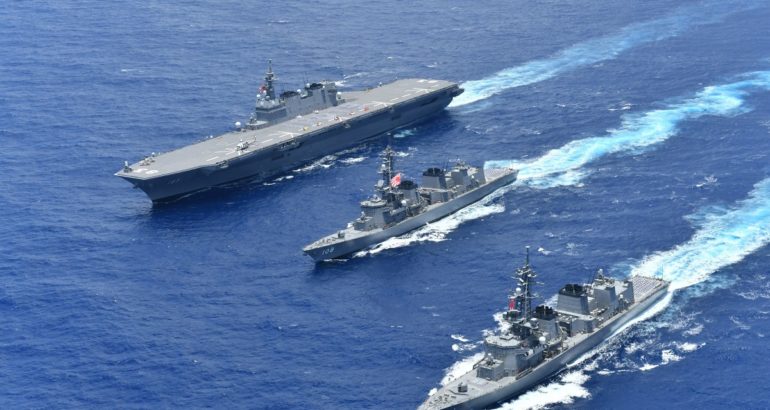 Japan's Ministry of Defense (MoD) has announced in its FY2020 defense budget that it will invest 3.1 billion yen (approximately US $ 28.3 million) to refurbish the destroyer Izumo which is the largest vessel in Japan Maritime Self Defense Force (JMSDF).

The purpose of this refurbishment is to give Izumo the operational capabilities of the state-of-the-art STOVL fighter jet, the F-35B.

To begin with, Izumo has been designed to operate the F-35B from the design stage. For example, Izumo’s aircraft elevators are designed to fit the size of the F-35B and to withstand its weight.

As such, the refurbishment, which has been budgeted this time, is intended to complete those capabilities that were originally provided to operate the F-35B.

Specifically, it is assumed that the flight deck will be heat-treated to withstand the high-temperature exhaust heat that the F-35B blows out upon landing, and that the CIWS fitted at the bow might be relocated to another location.

The refurbishment will be phased in during the scheduled repairs of Izumo after 2020, and will probably be done at the Japan Marine United (JMU) facility in Yokohama.

According to most reports in Japan, the refurbishment will make Izumo a “genuine aircraft carrier”, but the actual assumed role is significantly different. In the first place, after the refurbishment, Izumo will not be a ship that will “only” operate the F-35B. According to the description of the MoD, Izumo will operate the F-35B only when necessary, and will continue to operate mostly helicopters as is the case today. In other words, the refurbishment does not make Izumo a genuine aircraft carrier, but merely improves its “versatility”.

However, the combination of Izumo and F-35B is a very effective way to show Japan’s presence in the Indo-Asia Pacific region. For example, every year since 2017, Izumo and its sister ship Kaga (which will be refurbished to operate F-35B as well as Izumo) have been conducting long-term deployments in the Indo-Asia Pacific region for about two months alternately. At the time, Izumo and Kaga‘s airwing consisted exclusively in the SH-60K helicopter, which carries out anti-submarine warfare, but if the Japan Air Self-Defense Force (JASDF) F-35Bs were added to this, the impression on neighboring countries, including China of course, would change significantly. And, this will show these countries that Japan may be involved in issues in the Indo-Asia Pacific region, including the South China Sea.

Displacing 27,000 tons (full load), the Izumo-class DDH are the largest and flagships of the JMSDF. They have a length of 248 meters, accommodations for up to 970 (including crew and troops) and can carry and deploy up to 14 maritime helicopters such as the SH-60K.

Izumo was built by Japan Marine United (JMU), launched in August 2013 and commissioned in March 2015. Izumo has one sistership: JS Kaga.