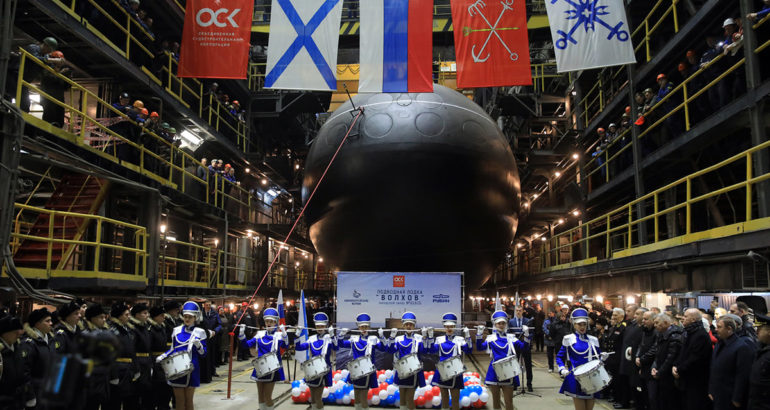 The Admiralty Shipyard of the United Shipbuilding Corporation (USC) floated the Volkhov diesel-electric submarine of project 636.3, the USC said.

Shipyard CEO Alexander Buzakov called it a worthy conclusion of the 2019 production program. “It is the second sub floated in the year of the 315th anniversary of the shipyard,” he said.

In November, the Petropavlovsk-Kamchatsky lead submarine was demonstrated to President Vladimir Putin. “We have no doubts that the whole series for the Pacific fleet will be built on time and the Volkhov will be handed over to the customer next November,” Buzakov said.

Commander of the Primorye flotilla of the Pacific fleet Rear Admiral Vladimir Yakushev praised the shipyard. “The Vokhov is another contribution of your enterprise to the growing naval might of our country. The Pacific navymen are ready to operate the modern subs in the Far East,” he said.

The Volkhov is the second submarine of project 636.3 for the Pacific fleet. It was laid on July 28, 2017. The Petropavlovsk-Kamchatsky first serial sub was handed over to the Navy on November 25, 2019. It was built in 28 months. The Magadan and the Ufa subs were laid on November 1, 2019. In October, metal was cut for the firth sub of the series which is to be completed in 2022.

The Admiralty Shipyard built 23 submarines of project 636 in 23 years.

Project 636.3 submarines (Improved Kilo by NATO classification) are the third generation of diesel-electric submarines which are most noiseless in the world. They develop underwater speed of 20 knots, submerge to 300 meters and have the cruising capacity of 45 days. The crew comprises 52 men, the underwater displacement is close to four thousand tons. They carry Kalibr missiles to strike at surface (3M-54 and 3M-541) and ground targets (cruise missiles 3M-14) and have new electronic equipment.