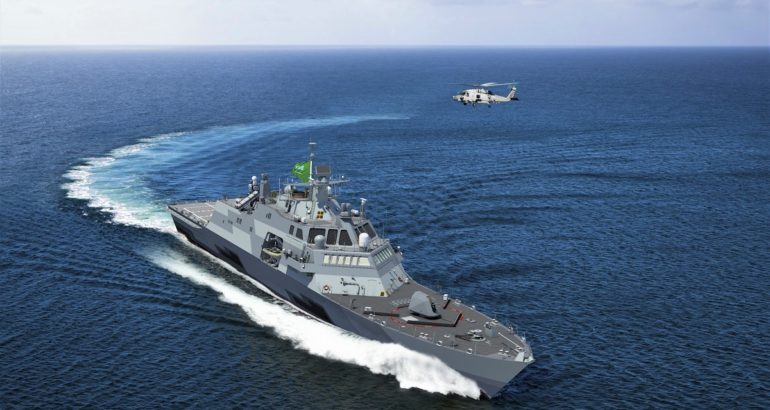 The U.S. Navy awarded a Lockheed Martin-led team, which includes Fincantieri Marinette Marine (FMM), a multi-billion dollar (USD) order for the construction of four Multi-Mission Surface Combatants ships, as part of the country’s Foreign Military Sales program. These ships will be for the Kingdom of Saudi Arabia.

Fincantieri will build the ships at the Marinette yard in Wisconsin, recently visited by U.S. Vice President Mike Pence. The now-definitized contract has a total value of approximately $1.3 billion dollars (USD) for Fincantieri Marinette Marine.

The Multi-Mission Surface Combatant is a lethal and highly-maneuverable, multi-mission surface combatant, which features the flexibility of the Freedom-variant Littoral Combat Ship steel mono-hull, built by the same team for the US Navy (9 LCS vessels have been delivered and there are currently 7 ships in various stages of construction), an increased range of 5,000 nautical miles and speeds in excess of 30 knots, making it capable of littoral and open ocean operation, and able to confront modern maritime and economic security threats.

“Orders such as these, besides being very significant from an economic point of view, mark themselves for important industrial aspects. This result caps off a remarkable work, which has brought us to consolidate an unparalleled reputation also in the US market, known to be very complex. It also is an acknowledgement of the strategic, technological and management skills that Fincantieri is able to express always to the highest level and in any context”.

Lockheed Martin and FMM, together with the naval architect Gibbs & Cox and over 800 suppliers in 42 states, are already cooperating for the US Navy’s LCS program, one of the most ambitious in the world within the surface ships. Fincantieri Marine Group (FMG), which owns Fincantieri Marinette Marine and two more yards again in the Great Lakes region, Fincantieri Bay Shipbuilding and Fincantieri Ace Marine, since 2008 has invested more than 180 million dollars to modernize the Wisconsin shipyards, hiring and training more than 1,000 people, with a total workforce in the three sites of about 2,500 people and more than 350 contractors.