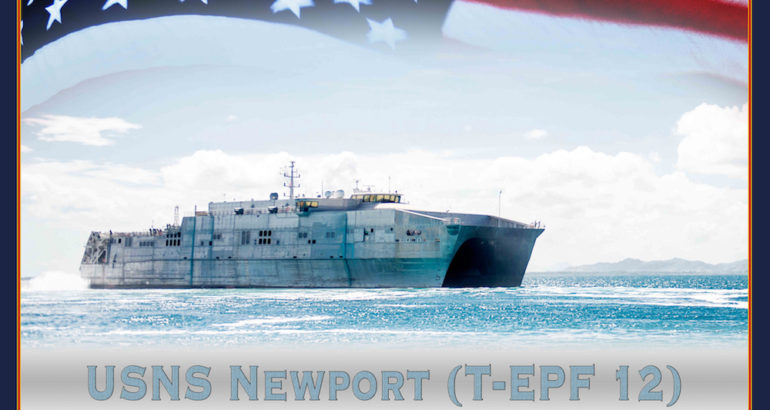 The U.S. Navy held a keel laying and authentication ceremony for its twelfth Expeditionary Fast Transport (EPF) vessel, Newport (EPF 12), at Austal USA’s shipyard., Jan. 29. The keel was said to be “truly and fairly laid” as it was authenticated by Charlotte Dorrance Marshall, signing her initials into the keel plate.

“We are excited to celebrate a major milestone in the construction of the 12th EPF of the class,” said Capt. Scot Searles, Strategic and Theater Sealift program manager, Program Executive Office Ships. “These ships have proven versatility and capability, allowing them to be strategic assets to our fleet and partners abroad. The milestone we celebrate today is the first of many as we work to deliver another highly capable platform.”

EPFs are non-combatant vessels designed to operate in shallow-draft ports and waterways, increasing operational flexibility for a wide range of activities including maneuver and sustainment, relief operations in small or damaged ports, flexible logistics support, or as the key enabler for rapid transport. The ships are capable of interfacing with roll-on/roll-off discharge facilities, as well as on/off-loading vehicles such as a fully combat-loaded Abrams Main Battle Tank.

EPFs support a variety of missions including the overseas contingency operations, conducting humanitarian assistance and disaster relief, supporting special operations forces, and supporting emerging joint sea-basing concepts. EPFs are capable of transporting 600 short tons 1,200 nautical miles at an average speed of 35 knots.  Each vessel includes a flight deck to support day and night aircraft launch and recovery operations. Burlington will have airline-style seating for 312 embarked forces with fixed berthing for 104.

USNS Burlington (EPF 10) was delivered in November 2018, and Austal USA is currently in production on Puerto Rico (EPF 11), which was christened in Nov. 2018. The Navy issued Austal long-lead-time material contracts in late 2018 for EPF 13 and EPF 14.

As one of the Defense Department’s largest acquisition organizations, PEO Ships is responsible for executing the development and procurement of all destroyers, amphibious ships, special mission and support ships, and special warfare craft.