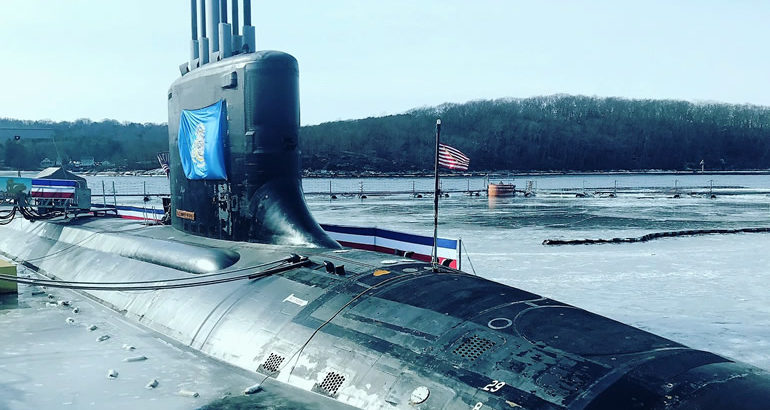 South Dakota is the seventh of eight Block III Virginia-class submarines to be built. The Block III submarines are made with the new Virginia Payload Tubes designed to lower costs and increase missile-firing payload possibilities. Electric Boat picture.

The U.S. Navy, with assistance from Mrs. Deanie Dempsey, the ship’s sponsor, gave the command, “Man our ship and bring her to life!” spurring the crew into action and all ship’s systems to be tested, including alarms, bells, radars, and scopes.

“South Dakota was built to be on scene and unseen, forward deployed and ready to take the fight to our adversaries and protect our shores here. We do that through executing the seven mission areas that the United States Submarine Force, which focus primarily on anti-submarine warfare and anti-surface warfare, but we are also very capable of reconnaissance operations and operations in littoral waters. As the commissioning crew, we’ve developed a special bond with the ship itself, which we will use to maximize our capability on our first deployment.”

South Dakota is the seventh of eight Block III Virginia-class submarines to be built. The Block III submarines are made with the new Virginia Payload Tubes designed to lower costs and increase missile-firing payload possibilities.

The submarine is 377 feet long, has a 34-foot beam, and will be able to dive to depths greater than 800 feet and operate at speeds in excess of 25 knots submerged. It will operate for over 30 years without ever refueling. Construction on South Dakota began 2013; the submarine’s keel was authenticated during a ceremony on April 4, 2016; and the submarine was christened during a ceremony Oct. 14, 2017.

The boat’s crest pays homage to its namesake and ships bearing the name South Dakota. In the center, sits Mount Rushmore National Memorial, the state’s most iconic destination. Surrounding Mount Rushmore are three coyotes, the state animal of South Dakota and a symbol used by many Native American tribes. Pheasant feathers and a rattlesnake tail hang from the side representing the state bird of South Dakota, and the silent and deadly stealth of SSN-790. Above Mount Rushmore, the sun shape pays homage to South Dakota’s state flag, with the 13 stars representing the battle stars awarded to BB-57 during World War II. Atop the crest sit two submarine dolphins, one silver and one gold. The silver dolphin represents the enlisted crew with the gold representing officers.

The boat’s motto is written in Latin “Subter Mare Dominamur” – “Under the sea we rule.”