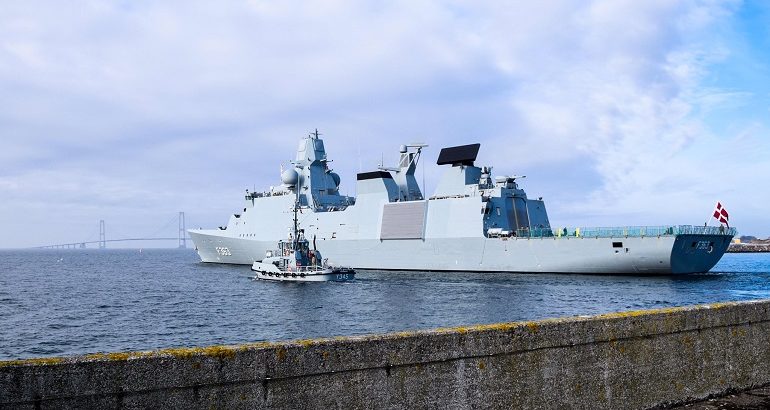 The Niels Juel set sails today, heading towards the Mediterranean to meet the French carrier strike group (CSG) in Toulon naval base. From March 4 to April 27, 2019, the frigate will help protect the French aircraft carrier Charles de Gaulle. According to the Danish Navy, this deployment is done on invitation from France and represents an opportunity to train in a unique naval operation.

The Danish frigate will carry out air control tasks around the CSG, including control of air traffic to and from the aircraft carrier. The vessel will operate in the eastern Mediterranean, the Red Sea, the Gulf of Aden, the northern Indian Ocean down to the Seychelles and the Persian Gulf.

“The Fact that we are invited to such a trusted and specialized task clearly shows that we have some skills in air defense. It is a major recognition for Denmark. It is not every day that we get the opportunity to protect an aircraft carrier, so I am proud of that.”

The frigate’s participation in this deployment gives her 160 crew members the opportunity to train in a complex naval operation involving several Allied nations. An opportunity that strengthens the Danish Navy’s operational capabilities.

“The security situation in the world entails an increased need for us to become even better at cooperating militarily with our core allies, including not least France. Besides that, we get training in advanced marine military operations and further develop our own knowledge and capacity in the area”, said Rear Admiral Torben Mikkelsen.

The Niels Juel frigate is the third and last Iver Huitfeldt-class frigate. They are air defence frigates displacing 6,645 tonnes, fitted with a Thales SMART-L long-range air and surface surveillance radar and 32x SM-2 surface-to-air missiles (among other weapon systems and sensors).

For the record, the French carrier strike group (CSG) should leave Toulon naval base in the coming weeks for a deployment of several months which should take it all the way to Southeast Asia. The French carrier recently took part in a major pre-deployment exercise with its entire air-wing.

Denmark Strengthens NATO with One Additional Frigate in the Baltic

Xavier Vavasseur 10 Jan 2022
The Danish Ministry of Defense (MoD) announced today that it will send the Iver Huitfeldt-class frigate "Peter Willemoes" and four F-16 fighter jets in the Baltics.