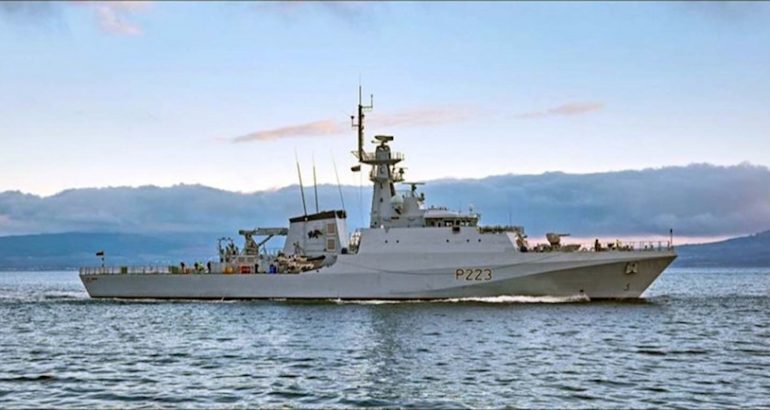 The transformation of the patrol ship force has taken a big step forward as HMS Medway Batch 2 River-class OPV raised the White Ensign for the first time, the Royal Navy announced on March 13, 2019.

The ship was handed over from BAE Systems, whose workforce joined the ship’s company on the flight deck to celebrate the milestone. Meanwhile HMS Forth and her crew are in the final stages to resume trials and training.

“People think these ships are tiny. They are not,” said Lieutenant Sam Fields, Forth’s Executive Officer. “The rest of the Navy is in for a bit of a shock.”

The Batch 2 River-class ships are bigger, faster and have a greater range compared to Batch 1. They feature a flight deck for a Wildcat HMA2 or Merlin HM1 helicopter and an air search radar capable of seeing more than 90 miles. The 90-metre Batch 2 River-class ships are also equipped with a 16 tonne crane to lift supplies ashore on disaster relief missions and accommodation for up to 51 soldiers or Royal Marines.

The Royal Navy will not use them primarily for safeguarding fishing stocks in home waters but ‘forward deploy’ around the world.

Medway will be a couple of months behind Forth in going to sea for a second time. She is currently having military systems installed on the Clyde after her successful first spell at sea before Christmas.

After more trials and training, she’s due to sail for Portsmouth in July. In September she’ll have her commissioning on the river Medway. She will also exercise the Freedom of the Borough.

After that there’s front-line training ready for her maiden deployment overseas at the turn of 2019/20. For now, the crew of about 40 – two thirds the full strength of 58 – are concentrating on readying the ship for the return to sea in three months’ time.