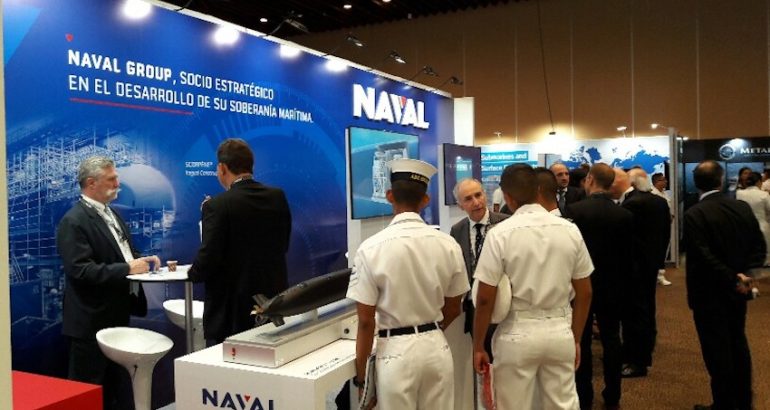 Naval Group is significantly increasing its multi-domestic presence in Colombia and Latin America to strengthen its long-lasting cooperation with the navies in the region, the French shipyard announced on March 13 at the Colombiamar exhibition, held from 13-15 in Cartagena de Indias.

Naval Group has been working with Colombia on the modernisation of the Padilla frigates since 2008 and has set up a Regional Representative Office in Bogota to reinforce its partnership with the naval defence industry in the region and as well as its participation to the naval defence projects launched by the Colombian navy and neighbouring countries.

Naval Group is currently competing in Colombia for two fleet replacement programs. First, the Colombian Navy initiated in 2015 the replacement of the Padilla frigates (PES=Plataforma Estrategica de Superficie). This program requires the new ships to be built locally which will involve the development of a naval cluster through intergovernmental, industrial, academic and scientific cooperation. On the longer run, the Colombian Navy will also need to replace its submarine fleet.

Naval Group also has a unique experience of successful transfers of technology for the construction of both surface ships and submarines, but also of naval facilities. Egypt launched its first Gowind built in Egypt on September 6, 2018 and Brazil launched its first Brazilian built

Scorpene submarine in December 2018, while India already operates its own submarines at sea. Transfer of technology has also been performed –or is currently on track- in Australia, Malaysia, Pakistan, Saudi Arabia or Singapore.

In South America, Naval group has recently reinforced its presence through two major contracts with Chile and Brazil, thanks to our Scorpene submarine, the most suitable solution to replace U209 submarines operating in the region.

Naval Group is also proud of its successes in the combat management system (CMS) retrofits on U209 submarines in the region which demonstrates its ability to work closely with the navies and local industrial partners, even on submarines not of its own design.

Naval Group is a naval systems provider and integrator, one of the few companies in the world with the ability to deliver complete warships with their combat systems and all the critical equipment necessary to engage naval power in a theatre of operations. It is involved at every stage in the product life cycle.

The stand on Colombiamar is reflecting this comprehensive offer with a focus on surface ships and innovative solutions.

Gowind is the multimission frigate proposed to Colombia for PES program. Gowind is Naval Group’s response to 21st century defence and security challenges. The platform combines high survivability characteristics with outstanding anti-air (AAW), anti-surface (ASuW) and anti- submarine (ASW) warfare performances thanks to the MU90 and to the CANTO-V.

The Gowind is operated with the SETIS. This state-of-the-art combat is combat-proven on the French Navy’s FREMM frigates and interoperable with NATO systems. It provides the operator with the best management and decision-making aids, ensuring the Gowind supremacy over conventional and asymmetric threats.

Nine of the ten Gowind vessels contracted are being built with foreign partners in Malaysia and Egypt. The first Gowind built in Egypt was launched on September 6, 2018.

Scorpène is the conventional submarine proposed to Colombia for its fleet replacement. Naval Group combines unique platform and combat system skills to provide operational superiority and safety benefiting from the French Navy legacy. Naval Group contributes to strenghten the sovereignty of its customers through long-term partnerships, industrial cooperation and through-life support services, as proven by its strong credentials.

Scorpène is ideally suited for action and operational effectiveness. Robust and enduring, it’s an ocean-going submarine also designed for shallow waters operations. Multipurpose, it fulfils the entire scope of missions such as Anti-Surface and Anti-Submarine Warfare, special operations, offensive minelaying and intelligence gathering.

Standing as the latest generation of combat system, SUBTICS addresses the growing challenges of modern submarines missions in blue and shallow waters such as Anti-Surface and Anti-Submarine Warfare, intelligence gathering, land-attack or deep strike.

Highly modular and scalable, SUBTICS can be integrated either on new platforms or as part of modernisation programmes for existing submarines.