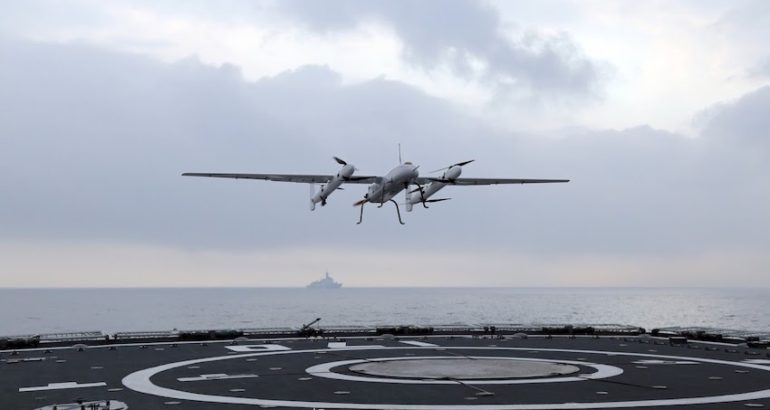 An UAV takes off from the guided-missile destroyer Lanzhou (Hull 170) during a training exercise in late February, 2019 (Credit: eng.chinamil.com.cn/Yu Lin)

This first flight test from a naval vessel took place during a three-day maritime training exercise in waters of the South China Sea conducted in late February by the PLA Southern Theater Command.

The drone took off from the helicopter deck of the Lanzhou destroyer,
the lead ship of Type 052C-class of destroyers (NATO reporting name Luyang II class), China Military Online reported on Feb. 27, without naming the drone or elaborating on any technical detail.

According to the Global Times, the drone would share many similarities with the Sea Cavalry SD-40, a VTOL fixed-wing drone developed by Xiamen Han’s Eagle Aviation Technology Co Ltd and displayed in various exhibitions.

The SD-40 is 2 meters-long and has a 3.7 meters wingpsan, allowing it to be stored in helicopter hangar. The left and right fuselages each have four propellers: two on top, two on the bottom. A larger propeller is installed at the rear of the aircraft, allowing a max speed of up to 180 km/h. With a ceiling range of 5,000 m, the SD-40 has an endurance of six hours and can take off and land under a Level 4 Sea situation. Its six kilograms payload allows it to be fitted with either EO gimbal, communication relay equipment, airborne digital SLR cameras, or a mini synthetic aperture radar (SAR).

The SD-40 drone is designed to carry out a wide range of missions: not only reconnaissance and SAR at longer ranges for destroyers and frigates, but also guide artillery fire from warships and damage assessment during an amphibious landing operation.