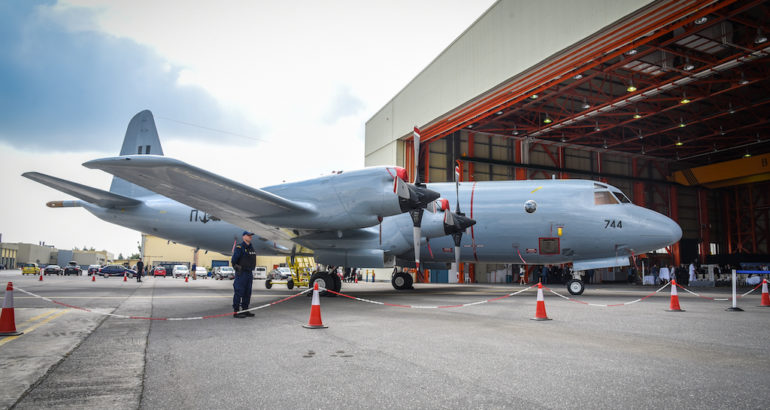 The aircraft is one of the five that the HN received in the 1995-1997 period, which flew until the end of 2009, when the last one reached the maximum flight hours. Due to the economic situation, the government decided to scrap any plans for their upgrade and withdrew them, despite the fact that such a project seemed to be high in the navy’s priorities.

In 2015 the newly elected government decided to bring the aircraft back into service, in light of the major geopolitical changes in the Aegean Sea and South/South-Eastern Mediterranean.

The programme assumed the delivery of the first aircraft in short time. For that reason it would undergo a Phased-Depot Maintenance (PDM) and full-scale structural Mid-Life Upgrade (MLU) to be activated in the shortest possible time, so as to support the certification of new crews to the platform. The full upgrade of the interim solution P-3B has been included as an option to the overall agreement.

The rest of the four aircraft will undergo PDM and MLU of the structural and mechanical components, to extend their operational life by 15,000 hours, and an upgrade of their electronic systems and sensors. As of now, no information has been released on the ASW systems that could be integrated on the platforms.

The FMS between the US Navy and Greece was signed in 2014, with a maximum cost of US$ 500 mil. In 2017, Rockwell Collins released a photo of a cockpit with its Flight2 integrated avionics package, which will equip the aircraft.

Moreover, the local ISI Hellas will install its Maritime Mission Integration & Management System (M2IMS). It is a tactical mission system that integrates the various sensors to carry out MPA, ASW, ASuW, SAR and ISR missions.

Another interesting and related development was the graduation of the first three fixed-wing pilots of the Hellenic Navy that will fly the P-3 in the future. Until recently, the aircraft flew with a joint crew comprised of Hellenic Air Force pilots and HN systems operators. The new pilots concluded their flying training and will then be certified on the P-3 type. Additional crews are undergoing the training scheme.