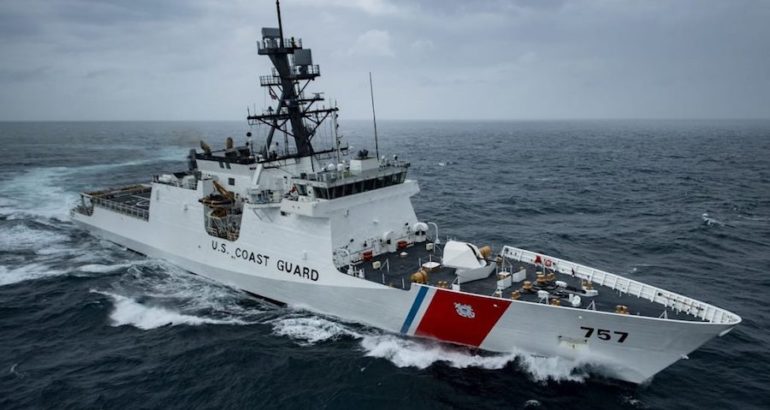 Huntington Ingalls Industries’ (HII) Ingalls Shipbuilding division delivered the National Security Cutter (NSC) Midgett (WMSL 757) to the U.S. Coast Guard. Midgett is scheduled to sail away in June and will be commissioned later this year, the US shipyard announced on May 1st.

“We have a mission statement in the NSC program that says during the construction of each NSC we will provide the men and women of the United States Coast Guard with the finest ship in their fleet,” said Derek Murphy, NSC program manager. “This excellence will be provided by our shipbuilders through working safely, attention to detail and ownership of work. Since the beginning of construction on NSC 8, we’ve seen an amazing transformation, made possible by the thousands of people who poured their heart and soul into this ship.”

Ingalls has now delivered eight Legend-class NSCs and has one more under construction and two more under contract. Stone (WMSL 758) is scheduled for delivery in 2020. In December of 2018, Ingalls received two fixed-price incentive contracts with a combined value of $931 million to build NSCs 10 and 11.

“From a homeland security and defense perspective, this ship provides unmatched command and control,” said Cmdr. Brian Smicklas, Midgett’s executive officer and acting commanding officer. “We’ve reached a number of accomplishments and milestones up to this point; however, there’s more work to do on the water. We have record drug flows in the eastern Pacific, and there are traditional Western Hemisphere missions that our Coast Guard brothers and sisters are conducting on the water every day. We also see a large increase in demand for the geographic combatant commanders for this specific National Security Cutter capability, and we’re excited to fill that and be a part of the national fleet.”

NSCs are capable of meeting all maritime security mission needs required of the high-endurance cutter. They include an aft launch and recovery area for two rigid hull inflatable boats and a flight deck to accommodate a range of manned and unmanned rotary wing aircraft. The Legend class is the largest and most technologically advanced class of cutter in the Coast Guard, with robust capabilities for maritime homeland security, law enforcement, marine safety, environmental protection and national defense missions. NSCs play an important role enhancing the Coast Guard’s operational readiness, capacity and effectiveness at a time when the demand for their services has never been greater.