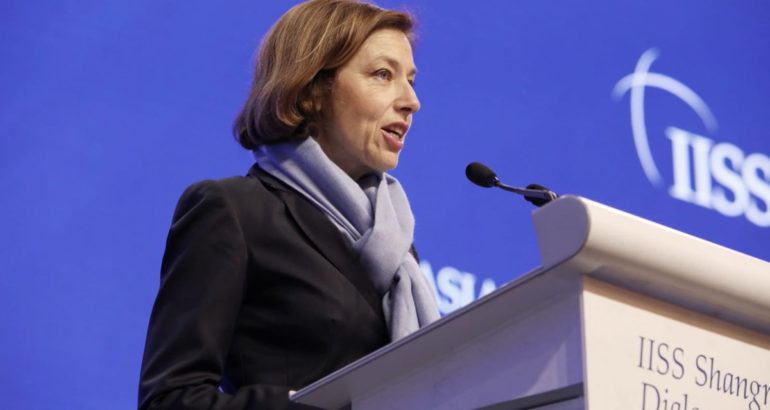 French Minister for the Armed Forces, Florence Parly, during the 2019 Shangri-La Dialogue.

France's Minister of the Armed Forces, Florence Parly, presented the new version of the document of reference on French defense in Indo-Pacific: "France and security in the Indo-Pacific" during the 2019 Shangri-La Dialogue.

The Shangri-La Dialogue is an event organized annually by the International Institute for Strategic Studies (IISS) in Singapore.

In this document (full version in English at this link), France underscores its long-term commitment to developing useful inter-dependencies with the States of the region as well as joint actions for the benefit of common security.

France, power of the Indo-Pacific

France, a country in the Indo-Pacific, plays a major role in terms of security and stability in the area, where it is fully engaged. The risks of tension and conflict are very high in this region which is proving to be the main source of growth in the world. Hence the need for France and its partners to pay the great attention to it.

Faced with these challenges, France has developed an ambitious strategy centered around the concept of “Indo-Pacific axis”. It is structured around four priorities:

France recalls its commitment to security, as a member of the United Nations Security Council and as a State of the Indo-Pacific region by its territories, its EEZ of 9 million km² and its population of more than more than 1.5 million nationals.

Present south of the Indian Ocean with the islands of Mayotte and Reunion, the Scattered Islands and French Southern and Antarctic lands, it is also in the Pacific with its territories in New Caledonia, Wallis-and- Futuna, French Polynesia and Clipperton.

Its overseas sovereignty forces and permanent military installations in the Indian Ocean and the Pacific ensure a unique presence among European countries and allow it to contribute to the stability of the region alongside its partners.

Strong commitment to security and stability in Indo-Pacific

The Indo-Pacific, a hotbed of economic dynamism, growth and technological innovation, is a source of global prosperity with vulnerabilities. Its security is therefore essential, and must be based on dialogue, respect for international law and rules established on a multilateral basis.

While North Korea’s nuclear, ballistic, chemical and biological programs pose a threat not only to security in North-East Asia, but also to the international order and non-proliferation architecture, France is promoting in the framework of the United Nations Security Council and the European Union, a political solution to the crisis while pleading for a full and effective implementation of the restrictive measures put in place against the regime to compel it to cease its proliferating programs.

Faced with tensions in the South China Sea, France, a leading civilian maritime and military power, continues to affirm the principle of freedom of navigation and overflight, to contribute to the security of maritime spaces, to promote uniform application of the United Nations Convention on the Law of the Sea. France does not take sides on issues of sovereignty in this maritime area and calls on all parties to settle their differences peacefully. It has also embarked European observers on the occasion of the transit of its ships in the region to make them aware of the importance of the stakes in the area.

Terrorism, a transnational challenge that struck France and Europe in 2015 and 2016, has ramifications as far as the Indo-Pacific. This phenomenon also threatens the security of the area through the spread of a hateful ideology and the recruitment of foreign terrorist fighters.

Aware of the risks and threats that cross the Indo-Pacific region, France makes regional security cooperation one of its major axes of efforts. France has established close links with a large number of Indo-Pacific countries and, through its defense cooperation, participates in the security of several of them. It consolidates its political commitment through an active presence, the development of partnerships and the intensification of its participation in various regional fora on security.

This reference document finally focuses on environmental safety and common spaces. The multiplier effect induced by climate change directly affects the Indo-Pacific. France will continue and deepen its efforts in this area, in collaboration with its partners in the region.

Benjamin Felton 21 Sep 2022
The Fijian Port of Suva is becoming a must-stop for foreign warships operating in the South Pacific, in what experts say is a sign of the region's growing importance to major powers.

Submarines and carriers? Upcoming French Deployments to the Pacific

Benjamin Felton 18 Aug 2022
The French Navy (Marine Nationale) is planning to send several high-end assets to the Indo-Pacific in the coming years...