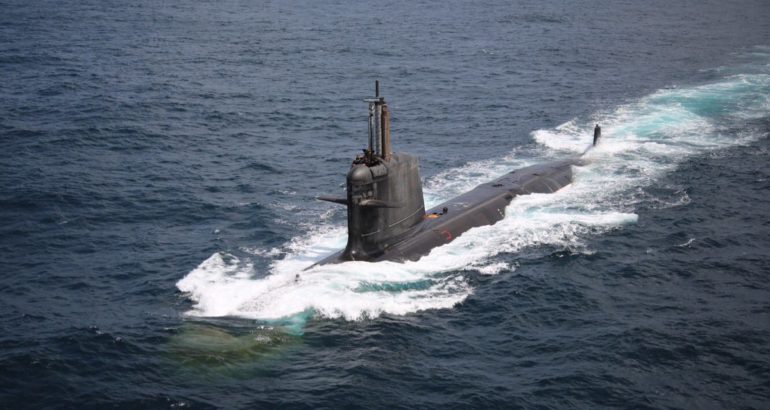 Khanderi, the second of six Scorpene class submarines being built in India by MDL, sailed out on 01 June 2017 from Mumbai harbour for her maiden sea trial. Indian Navy picture.

A report published by Indian daily newspaper Business Insider indicates that the Indian Navy refused to commission INS Khanderi, the second of the Scorpene-class submarine, because of its noise level. According to Naval Group, such reporting does not reflect facts.

The article, published on June 15, mentions that INS Khanderi‘s “engines and propellers were emitting an unduly high level of noise”.

The recent reports on the second Scorpene submarine for Indian Navy do not reflect facts. It appears these reports are based on wrong inputs received in bits and pieces from unreliable sources. There has been some delays in completing trials of the second submarine due to setting to work related issues and minor dent to the propeller which occurred during trials. The propeller was replaced and all noise trials have been completed successfully with results well above past specified performances.

Four Scorpene submarines out of 6 being built by MDL have been already launched, one commissioned into service two years back by Indian Prime Minister and number 2 is close to completion of trials and delivery.

The Scorpene’s famous stealthiness and quietness, thanks to most discreet propulsion system ever produced , have been confirmed by navies around the world during joint exercises. Indian Navy has been using the first of class INS Kalvari for operational deployments for past one year.

Six Scorpene-class submarines have been order by India in 2005 as part of the Project 75 program. They are constructed locally by the Mazagon Dock Limited shipyard in Mumbai, with assistance of Naval Group, designer of these submarines.