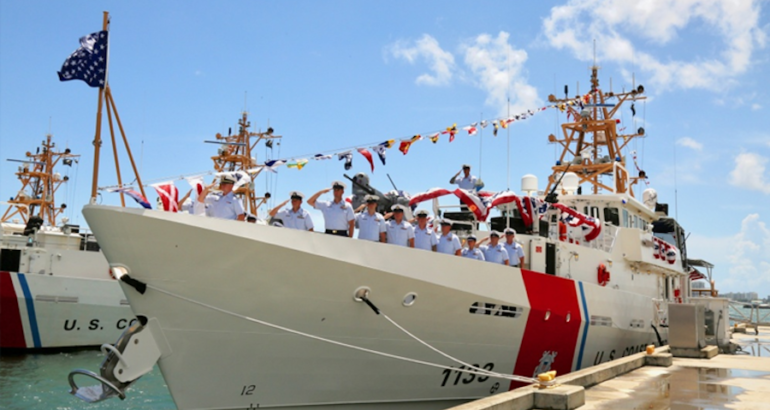 The US Coast Guard commissioned the 33rd fast response cutter (FRC), Joseph Doyle, in San Juan, Puerto Rico, June 8. The cutter is the seventh FRC to be stationed in San Juan.

The namesake of the cutter, Joseph Doyle, was known as one of the U.S. Life-Saving Service’s most distinguished surfmen. He was keeper of the Charlotte, New York, Lifesaving Station for 17 years and received the Gold Lifesaving Medal for leading two heroic rescues in the fall of 1878.

FRCs have a maximum speed of over 28 knots, a range of 2,500 nautical miles and an endurance of at least five days. The ships are designed for multiple missions, including drug and migrant interdiction; ports, waterways and coastal security; fishery patrols; search and rescue; and national defense. They feature advanced command, control, communications, computers, intelligence, surveillance and reconnaissance equipment; over-the-horizon cutter boat deployment to reach vessels of interest; and improved habitability and seakeeping.

The US Coast Guard has ordered 50 of the cutters to date. Thirty-three are in service: 12 in Florida; seven in Puerto Rico; four in California; and two each in Alaska, New Jersey, Mississippi, Hawaii and North Carolina. Future FRC homeports include Galveston, Texas; Santa Rita, Guam; Astoria, Oregon; and Kodiak, Seward and Sitka, Alaska.