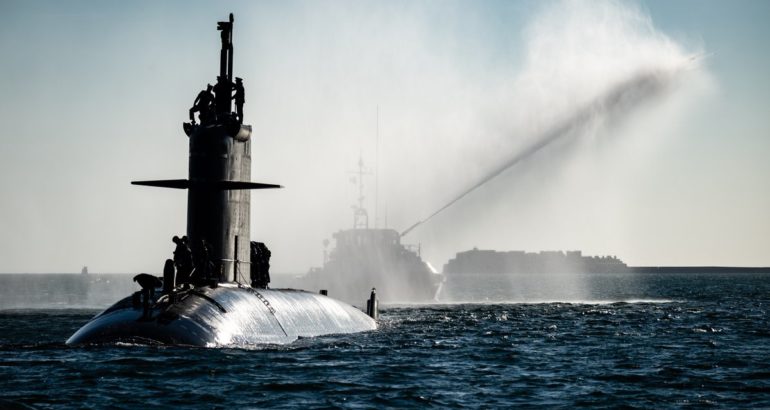 'Saphir' on her last voyage, reaching Cherbourg, where she will be dismantled. French Navy picture.

On July 3, 2019, the French Navy nuclear-powered attack submarine (SSN) 'Saphir' reached the port of Cherbourg in Normandie for decommissioning. After 35 years of service, 'Saphir' will be the first of six Rubis-class SSNs to be retired from active duty at the end of July 2019. The Rubis-class will be replaced by the new Suffren-class / Barracuda type SSN with the first submarine set for launch on July 12th at Naval Group' shipyard in Cherbourg.

According to the French Navy (Marine Nationale), SSNs (known as nuclear attack submarines or SNA in French) are true power instruments, combining long endurance and discretion. Their missions include support of deterrence (SSBNs), protection of the carrier strike group, intelligence, underwater warfare…

Saphir has participated in many missions from the Indian Ocean to the Caribbean and from the Far North to the South American coast. Among the iconic operations: Balbuzard in 1993, Kotor in 1999, Harmattan in 2011.

Saphir has reached Cherbourg on July 3rd, to be dismantled.

Referring to the renewal of the French submarine force and the replacement of the Rubis-class by Suffren-class SSN, Florence Parly, Minister of the Armed Forces, said on June 24:

“In a few days, an historical transition is going to be realized, but beyond the symbol, it is all the French excellence which is demonstrated during these two events: first an SSN which for decades never failed in its mission, then the arrival of a technological gem that will allow France to keep its status and its rank of military power. I congratulate all the Saphir submariners, past and present, their professionalism commands admiration. ”

Naval Group is set to launch Suffren, the first Barracuda type SSN, during a ceremony on July 12. According to Naval Group, Barracuda was designed to integrate the latest innovations and enhance the French SSN fleet’s performance for the future.

Fitted with four weapon tubes, The Suffren-class will be able to deploy Naval Group’s new heavyweight torpedo (the F21), MBDA’s Exocet SM39 Block 2 Mod 2 Anti-ship missile, MBDA’s Naval Cruise Missile for land attack. It will also be able to deploy FG29 mines and, down the road, drones such as unmanned underwater vehicles (UUVs). It will be able to deploy special forces and their equipment (such as a new Swimmer Delivery Vehicle called PSM3G and built by ECA Group) thanks to a modular (mission specific) Dry Deck Shelter or DDS.

The strike against land-based targets is a new capability for the French submarine forces while the ability to deploy special forces on a large scale and while submerged is an important capability increase compared to the Rubis-class.