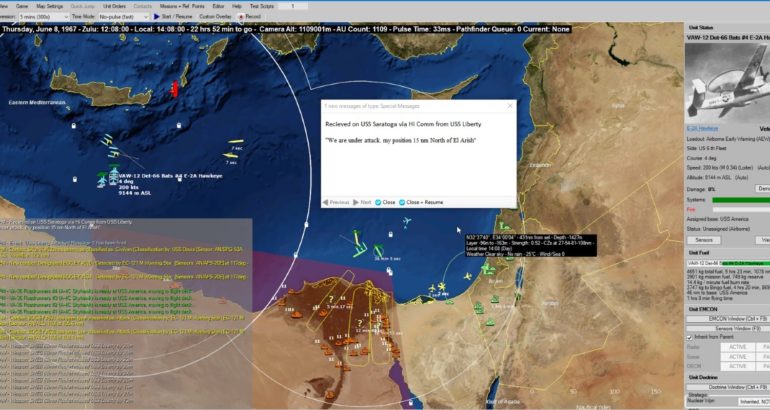 The Royal Navy will be using a professional version of naval warfare video game Command (Command: Modern Air / Naval Operations) as a training tool as part of a UK Ministry of Defence (MoD) £1.5m deal.

Wargaming experts at the UK Defence Science and Technology Laboratory (Dstl) are harnessing the creative talents of the commercial gaming industry to bring a novel approach to their work.

Several wargaming tools – based on strategy games which can be bought and played at home –offer an additional way of looking at combat strategy as well as being relatively easy to learn and operate.

It was this creative approach which led the UK to adopt commercial games for military-decision-support use, and Dstl has now placed a contract with a British video games firm. Wargaming experts from Dstl demonstrated the potential of the games with the Royal Navy, which is now trialling the use of one of the games for educational purposes.

Traditional analytical tools are often not as user-friendly as commercial games and can require significant experience to operate, being mainly focused on the algorithms over usability and engagement.

The tools will been hanced for the MoD purposes through gaming company Slitherine, who publish popular games such as Command and Flashpoint Campaigns. These recreational products include huge maps of simulated battlefield areas and modelling of modern and historic combat operations, vehicles and weapons.The contract with the Epsom-based company is worth up to £1.5millionover a 2-year period.

“We work on computer-assisted wargaming and manual wargaming. I have played strategy video games myself – even some of the titles that we looked at for this project. They are generally easier to learn how to use and have far larger user bases than analytical defence simulations.
Of course there are things we can’t use these for. Our own simulation modelling, as well as more traditional manual wargaming,is still vital. It’s just another tool for the job.
We’ll use these tools with our own data and scenarios to provide better ways of visualising military problems. The benefits are accessibility and ease of use, and the amount of existing users there are. For example, we’ve been able to train usersquicker by going out to Dstl staff who have played these games and training them to use them in a professional capacity.
We’re always looking for things to give us a wargaming edge. These games help us to think more creatively around issues.”