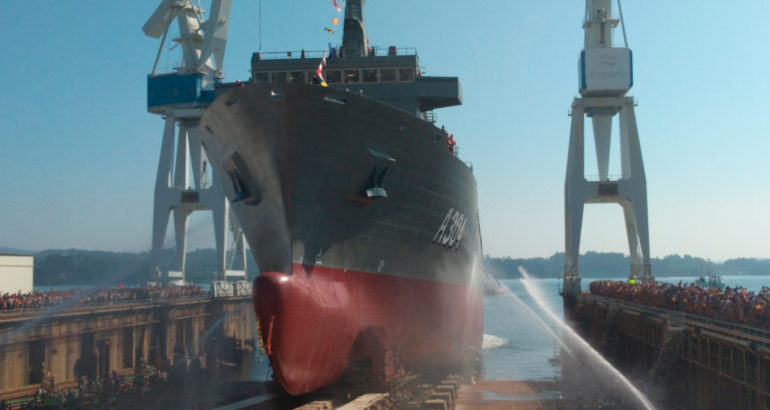 Navantia launched NUSHIP "Stalwart" on August 30 2019 at its shipyard in Ferrol, Spain. It is the second Supply-class AOR for the Royal Australian Navy.

During the event, the president of Navantia, Susana de Sarriá, thanked the Ministry of Defense and the Australian Navy for the trust placed in the company. She also highlighted the work of the staff of Navantia, the collaborating industry, and the rest of the partners who have put in this boat all their effort and know-how.

NUSHIP Stalwart is the second and final Supply-class Auxiliary Oiler Replenishment (AOR) ship on order for the Royal Australian Navy by Navantia. The Australian Supply-class ships are based on the Spanish Navy’s Cantabria-class design.

The ships are intended to carry fuel, dry cargo, water, food, ammunition, equipment and spare parts to provide operational support for the deployed naval or combat forces operating far from the port on the high seas for longer periods.

In addition to replenishment, the vessels can be used to combat against environmental pollution at sea, provide logistics support for the armed forces, and to support humanitarian and disaster relief (HADR) operations following a natural disaster.

The lead ship of the class, HMAS Supply was launched at the Navantia Shipyards in Ferrol, Spain on 24 November 2018.