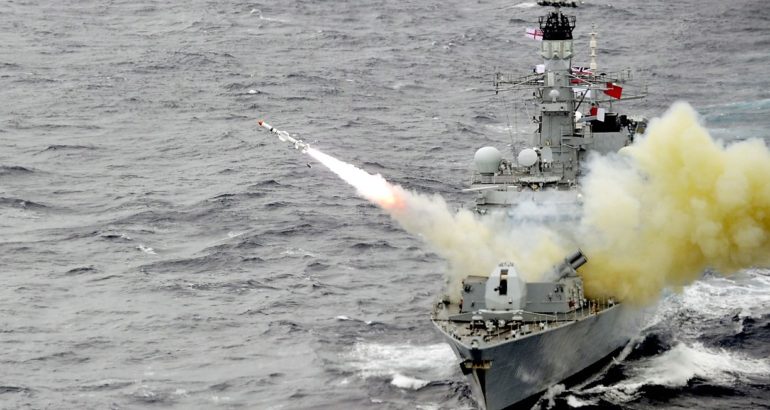 In a recent announcement, the UK Ministry of Defence Torpedoes, Tomahawk and Harpoon (TTH) Project Team further detailed its requirement to implement an interim surface to surface guided weapon to replace the existing Harpoon missile.

This follows a prior information notice (PIN) issued by the same TTH project team in March, as reported by Naval News. A major new requirement emerged however with the contract notice issued on August 19 compared to the PIN: A terrain following precision maritime land attack capability.

The TTH project team, part of the UK Ministry of Defence, hereafter referred to as the authority, has a requirement for the provision and introduction into service of the I-SSGW system as an interim replacement for the existing system that is going out of service.
The I-SSGW is to provide a ship launched over the horizon precision anti-ship capability and a terrain following precision maritime land attack capability.
It is anticipated that the I-SSGW capability will operate on X 5 Type 23 (Towed Array) frigates capable of concurrent Anti-submarine warfare (ASW) and Anti Surface Warfare (ASuW) operations in protection of a formed Maritime Tasking Group, for a 10-year period.

With this new requirement in mind, likely remaining bidders for the the SSGW requirement include Lockheed Martin with the Long Range Anti-Ship Missile (LRASM), Kongsberg with the Naval Strike Missile (NSM) and Saab’s RBS15 Mk4 , three anti-ship missiles of the latest generation. It is not clear whether Turkey’s Atmaca or Israel’s Gabriel V anti-ship missiles feature terrain following capability but this seems unlikely.

According to the contract notice, the I-SSGW solution is set to fill a gap for a 10-year period. First delivery of the ship installed equipment would be required by December 2022 and first delivery of missiles would be required by December 2023. The potential contract will be for 4 years, with the potential of option years to follow (up to 9 more years). This should answer the Royal Navy’s needs until the early 2030’s and the implementation of the UK-French FC/ASW missile program.

Naval News will try to learn more from the likely I-SSGW bidders at DSEI 2019 in a couple of weeks. Make sure to follow our DSEI news coverage from the show floor.