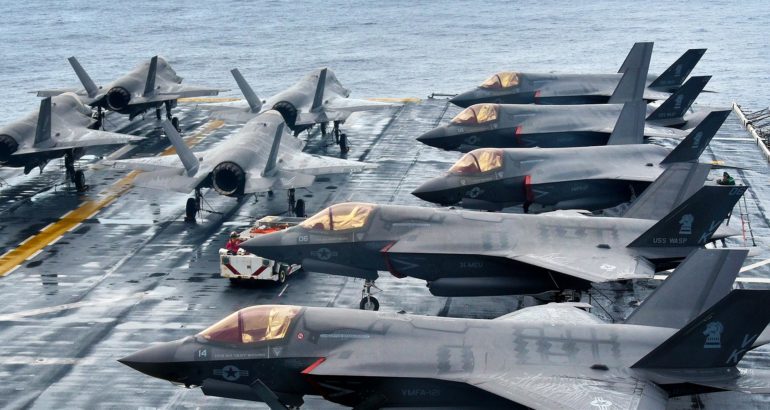 According to Japanese newspaper The Asahi Shimbun which revealed the information today, the Japanese government made this request back in March.

According to the newspaper, during their meeting, Abe told General Neller about plans to convert the two vessels, the largest and flagships of the JMSDF, into aircraft carrier for F-35B during their regularly scheduled overhaul periods which take place every five years.

It will take about 5 years (from budgeting to deployment) for the F-35B to be fully inducted with the Japan Air Self Defense Force (JASDF). As we reported recently, the “air force” and not the “navy” will be flying the aircraft.

With these factors in mind, the Japanese government made an official request to the USMC. It specifically asked during the meeting “for cooperation and advice on how to operate the fighter on the deck of the modified ships” to which General Neller said he would “help as much as possible”.

In addition, The Asahi Shinbum quoted Japan’s Defense Minister Takeshi Iwaya as saying “The Izumo-class aircraft carrier role is to strengthen the air defense in the Pacific Ocean and to ensure the safety of the Self-Defense Force pilots”. Regarding the possibility of the arrival and departure of US military aircraft, “There may be no runway available for the US aircraft in an emergency. I cannot say that the US F35B should never be placed on an [JMSDF] escort vessel.”

The USMC is already assisting the Royal Navy with their own aircraft carrier program. In December 2016, the British Government announced that it reached an agreement with the United States to allow the deployment of USMC F-35s from Queen Elizabeth upon the ship’s entry into service.

On Tuesday Sept. 25, 2018, Royal Navy Cmdr. Nathan Gray and Royal Air Force Sq. Ldr. Andy Edgell, both test pilots, were the first to land F-35B (belonging to the USMC) on board HMS Queen Elizabeth. Another set of F-35B / HMS Queen Elizabeth trials is set to take place in the United States this fall.

Japan decided in December 2018 to procure 42 STOVL aircraft to strengthen the country’s defense in its southern islands (due to a limited number of air bases and increasing threat from China). An official announcement on the selection of the F-35B was made last week.

The JASDF has 105 F-35A conventional takeoff and landing (CTOL) variant on order with about a dozen already operational.

Displacing 27,000 tons (full load), the two Izumo-class DDH are the largest vessel of the JMSDF fleet (as well as its flagship). They have a length of 248 meters, accommodations for up to 970 (including crew and troops) and can carry and deploy up to 14 maritime helicopters like the SH-60K. It hangar and elevator can also accommodate the V-22 Osprey tilt-rotor aircraft (17 on order, first one delivered to the JASDF in August 2017).