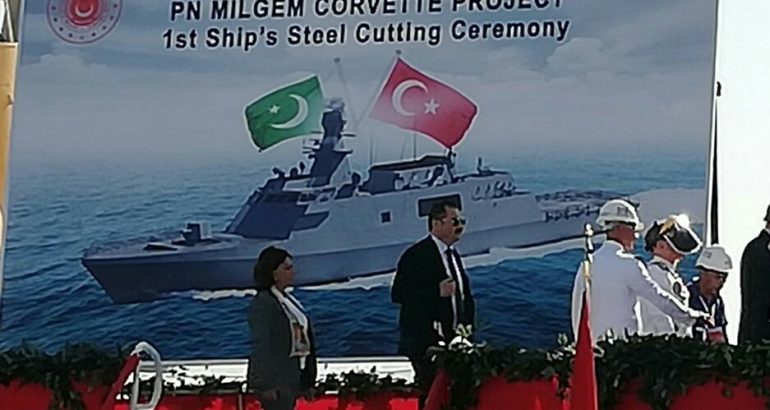 Pakistan Navy Chief OF Staff Admiral Zafar Mahmood Abbasi and the President of the Turkish Republic, Recep Tayyip Erdoğan jointly cut the first steel of the first Milgem class warship for Pakistan. The ceremony was held on 29th September 2019 in Istanbul Naval Shipyard.

A version of this post originally appeared on Bosphorus Naval News. It’s been republished here with permission.

In July 2018, a contract was signed between Military Factory and Shipyard Management Corporation (ASFAT) of Turkey and the Pakistani National Defense Ministry Ammunition Production and Karachi Shipyard for the construction of four Milgem class warships. The construction of the first ship will take 54 months and she is expected to be launched in 2012 and delivered to Pakistan Navy in 2023. The remaining ships will follow her in 6-month intervals. The last ship will be handed over in 2025.

The contract has also provisions for transfer of design rights and construction know-how from Turkey to Pakistan.

The first batch of two ships will be constructed in Istanbul Naval Shipyard while the remaining two in Karachi Shipyard & Engineering Works.

The exact configuration of the Pakistan Milgem Class ships has not made public. During the Aman Naval Exercise held in February 2019, Admiral Abbasi said that Pakistan ships will be fitted with a 16-Cell VLS behind the main gun for Chinese made medium-range air defense missiles probably LY-80/HHQ-16 variant.

The main offensive weapons of the Pakistan ship could be either Chinese C-802 or local Harbah ASCMs. A CGI image used during the ceremony shows Turkish Aselsan built Gökdeniz close-in weapon system on the Pakistan ship in place of the RAM missile launcher of the Turkish ships.