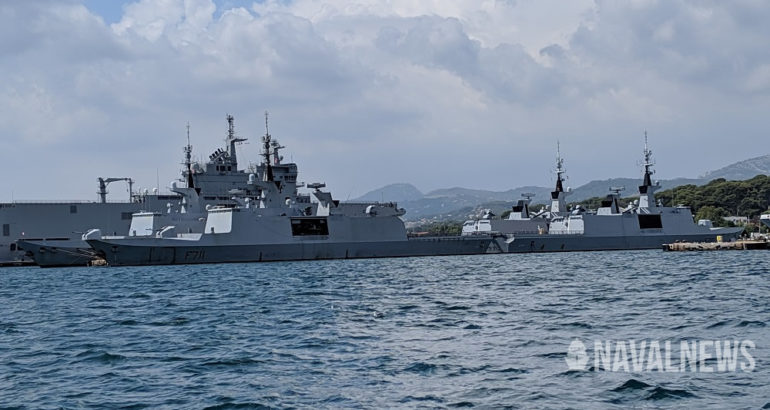 Four of the five La Fayette-class frigates moored in Toulon naval base in August 2019. Only 3 frigates will receive the MLU.

The French Navy (Marine Nationale) named the three (out of five) La Fayette-class frigates selected to receive a mid-life update: The three frigates retained for the comprehensive upgrade are: La Fayette, Courbet and Aconit.

MLU work will focus on on-board computer and electronic systems, modernizing the propulsion control and improving the digitization as well as the connectivity of the various sensor systems.

The French Armament General Directorate (DGA) selected Naval Group (then DCNS) as main contractor for the La Fayette-class MLU program in May 2017. It will be carried out in Toulon starting from 2020. The first updated frigate will be delivered in 2021.

One of the highlights of this overhaul will be the addition of a hull sonar, the Kingklip by Thales, giving the three frigates new capabilities in anti-submarine warfare.

In terms of weapon systems, the MLU will add two SADRAL CIWS armed with MBDA Mistral missiles, replacing the ageing CROTALE SAM system by Thales (which was said to be ineffective against sea-skimming anti-ship missiles). The combat management system will be replaced by a version derived from the one used on the Charles de Gaulle aircraft carrier. The tactical data links will be modernized.

This modernization will add life to the vessels and keep them up to date for modern naval warfare well into the 2030s.

Designated as FLF Frégates Légères Furtives (for Light Stealth Frigates) in the French Navy, the La Fayette-class are versatile surface combatants that are often deployed either on their own or as part of a task group.