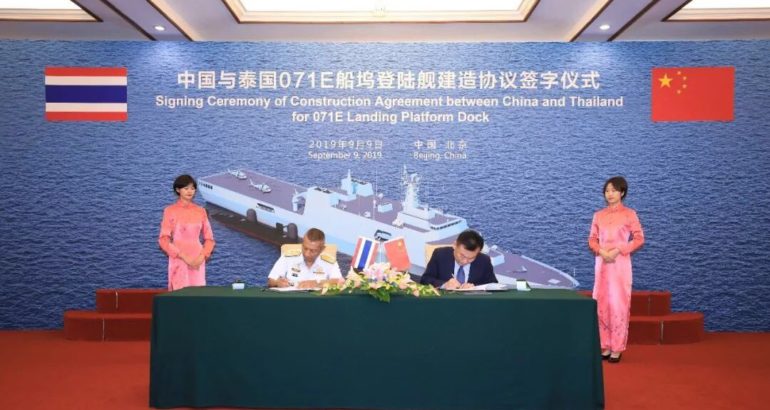 Thailand signed a contract with China for the procurement of a Type 071E landing platform dock (LPD) on September 9, 2019. China State Shipbuilding Corporation (CSSC) will build the amphibious vessel for the Royal Thai Navy.

The People’s Liberation Army Navy (PLAN) currently has five vessels of the Type 071 class commissioned in its fleet, with three more on the way. Thailand becomes the first export customer of the class.

Originally designed after the 1996 Taiwan Strait crisis, the Type 071 is 210 meters long and 28 meters wide. It is capable of carrying an 800 marines (1 battalion) and some 20 amphibious vehicles.

For amphibious warfare, the Type 071’s well deck may deploy at least two Type 726 / Type 726A, a Chinese LCAC of approximately 150 tonnes. Each LCAC is designed to deploy a battle tank (ZTZ-96A for example). The ship is also fitted with two large hangars and a flight deck, where two Z-8J helicopters can be operated simultaneously. The ship is fitted with one 76 mm gun and four 30 mm close-in weapon systems.

Things have been moving fast since, with the commissioning of the 4th vessel in the class, Yimeng Shan (pennant number 988) in February 2016, Longhu Shan (980) in September 2018 and Wuzhi Shan (987) in January this year.

The 7th Type 071, Wudang Shan, as well as the 8th one (name yet to be revealed), are currently undergoing fitting out in Shanghai. The latter, launched at Hudong-Zhonghua Shipyard on June 6, 2019, is expected to be the last, at least for the second batch of orders.

The deal was reported to cost only Bt6.1 billion (200 million USD). Further details such as the location of the construction and delivery date have not been disclosed. The Royal Thai Navy’s Chief, Commander Admiral Luechai Ruddit told local media The Nation Thailand that the deal was transparent, and the large ship could be used for civilian purposes when needed.

China is also pursuing export of its Type 071E LPD to Malaysia, as part of the future MRSS requirement: