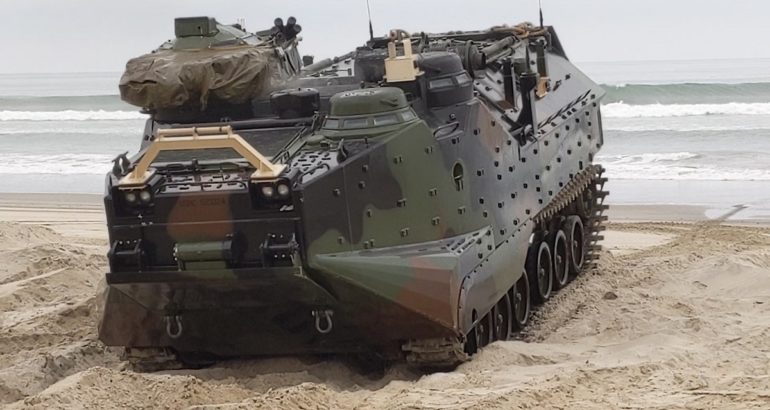 “Assault Amphibious Vehicles were structured to carry troops in water operations from ship-to-shore, through rough water and the surf zone. This modernized upgrade will allow the Marine Corps to remotely traverse from ship-to-shore with an organic vehicle capability to breach and proof lanes and landing zones for landing forces.”

There are two more unmanned remote breaching/proofing sets under development, both funded by MCSC. According to Bride, further development and testing of the RC AAV with the breaching mission sets will occur over the next two years.

“The end goal of the development program is to demonstrate that the RC AAV is a logical and suitable choice for the future of the Marine Corps’ investment into unmanned ground and amphibious platforms,” said Bride. “These upgrades will create a more efficient and lethal force that can come from land or sea.”

While explaining the purpose of the RC AAV, Bride mentioned how testing revealed that the upgrades were improving the platform’s performance.

Bride said there were many test objectives recently performed at MCSC’s AVTB.

“Out of the many, one of the key indicators of success during this testing was that we were able to successfully perform 22 surf zone crossings and 13 open water transits,” said Bride.

Stephen Hunt, head of Expeditionary and Maritime Systems Department at NSWC PCD said collaborative efforts such as these help establish a culture of urgency and innovation across the NR&DE.

“I believe the DoD is ushering in a new cultural shift that encourages the NR&DE to collaborate in order to make rapid, impactful advances in capability,” said Hunt. “When we optimize our technical expertise through collaboration, just as the RC AAV team demonstrated at Camp Pendleton, we’re well on our way to accomplishing Naval Sea Systems Command’s desire to “move the needle” when it comes to rapidly providing capability to the United States Navy.”