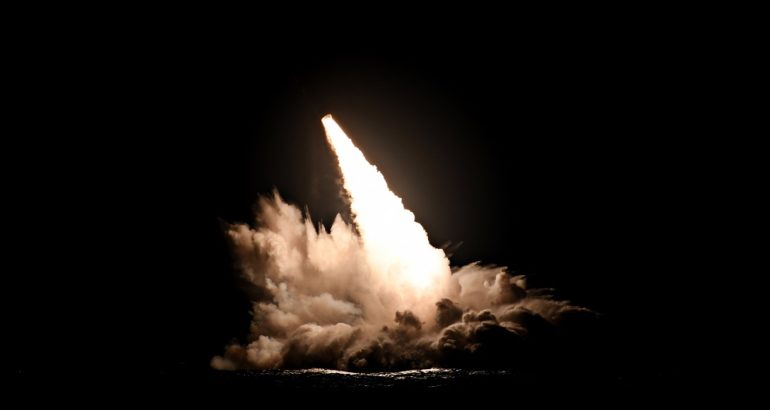 The first two launches took place Sept. 4, and the last two were Sept. 6. All occurred before sunrise.

These test flights were part of a Commander Evaluation Test (CET) whose primary goal was to validate performance expectations of the life-extended Trident II (D5) strategic weapon system.

These launches mark 176 successful flights of the Trident II (D5) strategic weapon system. CETs and other flight tests are conducted on a recurring, scheduled basis to evaluate and ensure the continued reliability and accuracy of the system. The missile tests were not conducted in response to any ongoing world events.

“Our nation’s sea-based deterrent has been a critical component of ournational security since the 1960s, and this week’s launches continue to demonstrate the credibility and reliability of our life-extended missiles”

The Trident II (D5) strategic weapon system, originally designed with a life span to 2024, recently underwent a life extension that will keep it operational through the late 2040s. The life-extended missiles will serve for the remaining service life of U.S Ohio-class and United Kingdom Vanguard-class SSBNs, and as the initial loadout for the U.S. Columbia-class and U.K. Dreadnought-class SSBNs. The life extension program addressed potential aging and obsolescence issues.

USS Nebraska (SSBN 739) is the 14th submarine of the Ohio class of ballistic missile submarines (SSBNs), and the second U.S. Navy ship to bear the name.

While stationed on the East Coast, Nebraska completed her first strategic deterrent patrol in August 1994 and became the first Ohio-class submarine to visit Europe and Halifax, Nova Scotia. In 1996, Nebraska was honored by U.S. Strategic Command (STRATCOM) as the SSBN recipient of the Omaha Trophy for excellence in strategic deterrence.

As part of an effort to balance the nation’s strategic assets, Nebraska shifted her homeport to Naval Submarine Base Bangor, Wash., in October 200. Since then, Nebraska has continued her tradition of excellence, receiving the Battle Efficiency Award (Battle “E”) in 2010 and 2011.