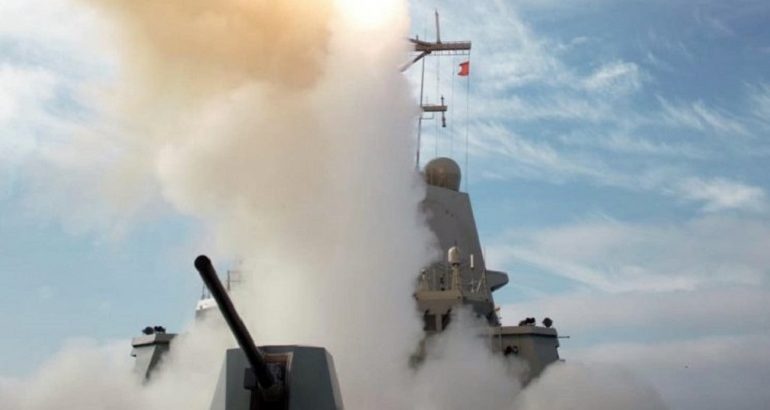 HMAS Brisbane's recent live missile engagement in the US.

Using remote sensor data from U.S Navy Arleigh Burke-class guided missile destroyer USS Stockdale, HMAS Brisbane completed a live missile engagement via the CEC off California. This was a first for the RAN. The event tested the combat system against a range of challenging targets and tactical situations.

Cooperative Engagement Capability provides a secure communications capability between Australian and US equipped ships, aircraft or land forces and allows a unit to detect and, if needed, engage a threat identified by another ship or aircraft.

The Hobart Class DDGs are based on the Navantia designed F100 frigate and is coupled it with the Aegis Combat System. All three vessels constructed in Australia by the Air Warfare Destroyer Alliance.

The Hobart-class provide air defence for accompanying ships in addition to land forces and infrastructure in coastal areas, and for self-protection against missiles and aircraft. The Aegis Combat System incorporating the state-of-the-art phased array radar, AN/SPY 1D(V), in combination with the SM-2 missile, provide an advanced air defence system capable of engaging enemy aircraft and missiles at ranges in excess of 150km.

While visiting HMAS Hobart during MADEX 2019, Naval News learned that the class is fitted with the Baseline 7 of the Aegis combat system.

HMAS Brisbane is the final of three ships of the Hobart class guided missile destroyers. Her sister ships will be HMAS Hobart and NUSHIP Sydney. The keel of Brisbane was laid down on 3 February 2014 and was launched on 15 December 2016. HMAS Brisbane commissioned on 27 October 2018.

The Hobart-class can carry a MH-60R helicopter for surveillance and response to support key warfare areas. The surface warfare function includes long range anti-ship missiles and a naval gun capable of firing extended range munitions in support of land forces.