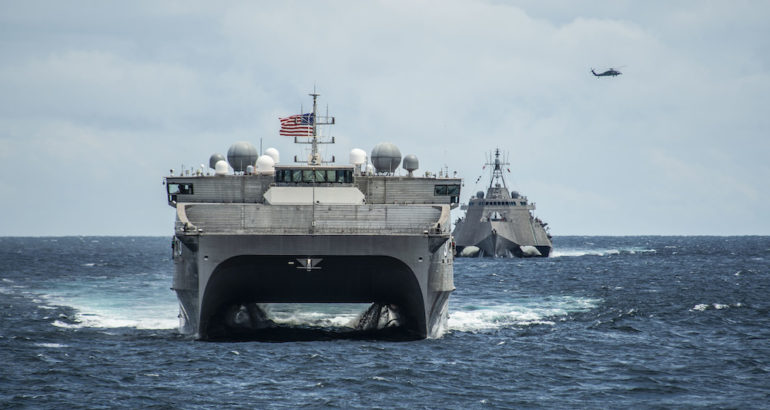 Austal Ltd is pleased to announce that Austal USA has christened the twelfth Spearhead-class Expeditionary Fast Transport (EPF), the future USNS Newport (EPF 12), at a ceremony held over the weekend at its state-of-the-art ship manufacturing facility in Mobile, Alabama.

Newport is the twelfth of fourteen EPF’s that Austal has under contract with the U.S. Navy, 10 of which have been delivered with the remaining 4 in various stages of construction.

“Austal USA is doing an outstanding job, constructing these highly-versatile vessels efficiently and consistently, to the highest standards. We couldn’t be prouder of the fact that of the 10 EPFs delivered in just over 10 years, seven are currently deployed to US Navy operations around the world, demonstrating the broad application and effectiveness of the platform,” he said.

The future USNS Newport was officially christened by ship sponsor, Charlotte Marshall and was named after Newport, Rhode Island – home to U.S. Naval Station Newport and the Naval War College.

The 103 metre EPF is capable of transporting 312 embarked troops and 600 short tons of cargo up to 1,200 nautical miles at an average speed of 35 knots. The ships can operate in shallow-draft ports and waterways, interface with roll-on/roll-off discharge facilities, and on/off-load a combat-loaded Abrams Main Battle Tank (M1A2).

The EPF includes a flight deck for helicopter operations and an off-load ramp that allows vehicles to quickly drive off the ship. The ramp is suitable for the types of austere piers and quay walls common in developing countries. EPF’s shallow draft further enhances littoral operations and port access. This makes the EPF an extremely flexible asset for support of a wide range of military and other (humanitarian and disaster relief) operations to small or damaged ports.