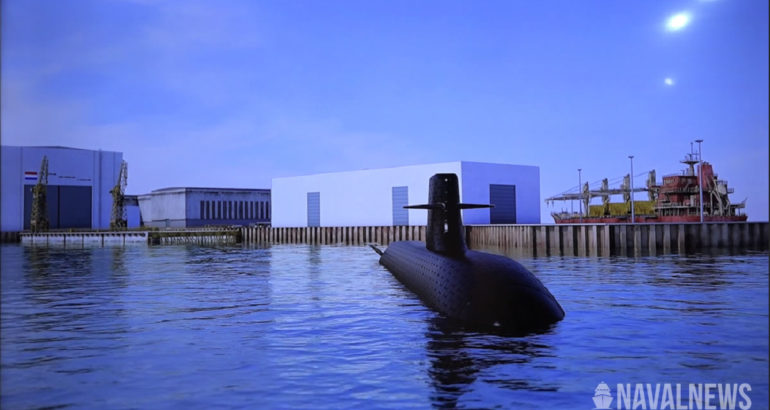 Naval Group participated to the NEDS NIDV's Defence & Security exhibition today in Rotterdam. During this event, Naval Group shared its vision on the development of the submarine community in the Netherlands. The project will generate a workload of 15 million man/hours and is expected to create over 2000 jobs in the Netherlands.

In view of the Walrus capability replacement programme, Naval Group demonstrates their will to commit to a full submarine IP and knowledge-sharing with the Dutch knowledge centers and industry. This will empower the Netherlands submarine community to take part in the future design and build phase, thus reinforcing the existing knowledge and leading to an autonomous maintenance and upgrade of the submarine.

Naval Group has successfully adopted this methodology in Australia, which is leading to the development of a game-changing capacity with a Barracuda-family submarine which offers outstanding acoustic superiority as well as expeditionary capabilities.

“What is at stake in this project is not industrial workload for Naval Group in France-as our submarines factories will be quite busy along the next decades-but the European cooperation within the maritime industry of our two countries. Beyond the industrial workload which will be transferred to the Netherlands, Naval Group is totally committed to support the Netherlands in remaining fully autonomous on operational, strategical and technological aspects on the long- term basis.”

With all the complexities and long lead-time involved in a submarine project, it is crucial to determine how strategic knowledge and expertise is shared, used and maintained over a period which exceeds thirty years.

Defining all the required technical and operational trade-offs based on a value-mapping process through an in-depth dialogue with the client is key to reach the best possible submarine platform.

For this purpose, Naval Group has released its plan for the future submarine design and production ecosystem at NEDS. One of the key features of Naval Group’s vision to organize transfer IP rights and design authority to the Netherlands, which effectively will deliver to local industry and knowledge centers an in-depth understanding and mastering of the selected design. The submarine project will see the reinforcement of a submarine community whose contribution and expertise will grow over the years when key upgrades or changes are implemented on the chosen design. In this process, Naval Group has already qualified 30 new companies to be Tier 1 and 2 suppliers for this programme and other international programmes.

In February 2019, Naval Group announced the partnership with Royal IHC. The two companies brought their complementary experience and expertise in designing and manufacturing complex maritime and defense systems together in order to offer the best submarine to the Netherlands and fully comply with the Defense Industrial Strategy (DIS).

In continuity to this important first step, Naval Group now unveils one of its strategic partnerships: the teaming agreement with Contour, whose team possesses a comprehensive experience in providing simulation and digital training tools for the Netherlands MOD and notably the Royal Netherlands Army. Their expertise will allow modern simulation tools to be deployed to ease the crew’s training period before the actual submarine is sent on trials.

Using the Dutch world-class maritime ecosystem, Naval Group has identified more than 30 partners in the country partners of excellence which can provide critical systems and components for submarine and surface ships programmes alike. The submarine community will remain a center of excellence where the best Dutch expertise will be sustained.This ambitious industrial cooperation program is expected to generate over 2000 jobs, which represent 15 million man-hours, for the Netherlands economic growth during the design and build phase. Most of this capabilities will then be used for decades for through-life support.

“Naval Group deliberately involves local partners in its international activities. The purpose of these agreements is to pool a Dutch submarine community for the Netherlands would Naval Group be selected for the Walrus replacement program. Key to a successful cooperation is a know-why methodology and a true IP and know-how repository to build-up and contribute that unique expertise, which will support in the long-term both the Netherlands’ but also international submarine programmes”

A long-term commitment towards the Dutch industry

The Dutch ecosystem has long been a partner with Naval Group on several major programmes; since 2013, a volume of 200 million euros contracts has been awarded to Dutch industrial and knowledge partners covering both French and international programmes. At NEDS, Naval Group deepens existing bonds with the Dutch maritime and defense industry, building and expanding existing relationships with more than 70 companies and knowledge institutes.

Sliedrecht-based company DBR has just been selected to supply key propulsion equipment on Naval Group’s latest international ship programme. The company, well-known in the maritime industry, will for the first time enter the naval military market with this contract.

For the Belgium-Dutch Mine Counter Measure Vessels program, several Dutch actors are about to be consulted. For instance, Dutch knowledge center Marin has already been selected by Naval Group in 2019 to test and improve its latest hull design, delivering improved hydrodynamic capabilities along with better energy-efficiency. For this program, other domains will be opened to Dutch competitors such as IPMS (Integrated platform management system), IBNS (Integrated Bridge Navigation System), radar, ventilation, firecontrol, speedboats and handling systems,…