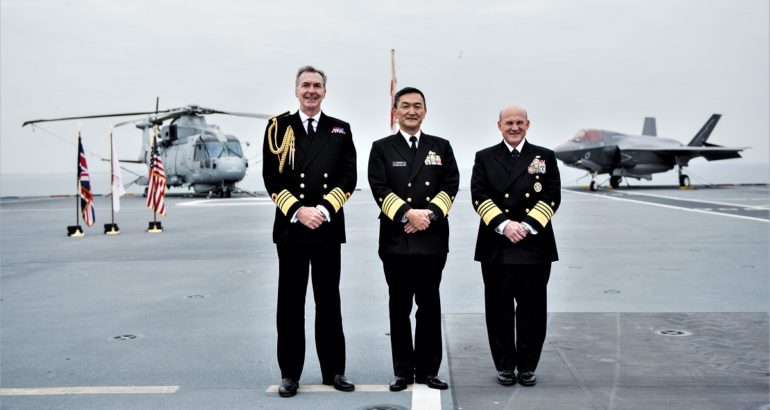 During the meeting, the three leaders signed a trilateral cooperation agreement reaffirming their commitment to increased collaboration and cooperation.

“Today, we reaffirm our commitment to strengthen our common efforts, which demonstrates that our relationships are institutional, rather than merely personal. This agreement strengthens our naval bonds and codifies our continued dedication to a free and open maritime commons. There is much to celebrate in our trilateral relationship; indeed the whole is greater than the sum of its parts.”

Gilday said that operating together with Allies like the United Kingdom and Japan, who have global reputations for conducting the most complex and demanding naval operations, is critical to security.

“We should adapt ourselves to a newly emerging security trend. With this trilateral heads of navy meeting as a catapult, I am confident we’ll work together to find our way ahead.”

The U.S., Japan, and United Kingdom maritime forces regularly operate together, most recently in two trilateral anti-submarine exercises in the Indo-Pacific region this past year.

“In an increasingly interconnected world, partnerships and alliances such as this are vital for protecting the freedoms of the international community. I look forward to continuing to learn from one another, sharing our experiences and exploring where we can pursue our common aims together.”

Gilday expressed his gratitude to his counterparts aboard HMS Queen Elizabeth and said he looks forward to expanding cooperation at sea, which remains a foundation for security, stability, and prosperity.

“Ensuring access to waterways – and the economic prosperity that flows with it – requires a continued commitment to international norms and the law of the sea,” Gilday said. “Being ready to defend these norms is important to us all. This is why we all continue to fly, sail, and operate wherever international law allows.”