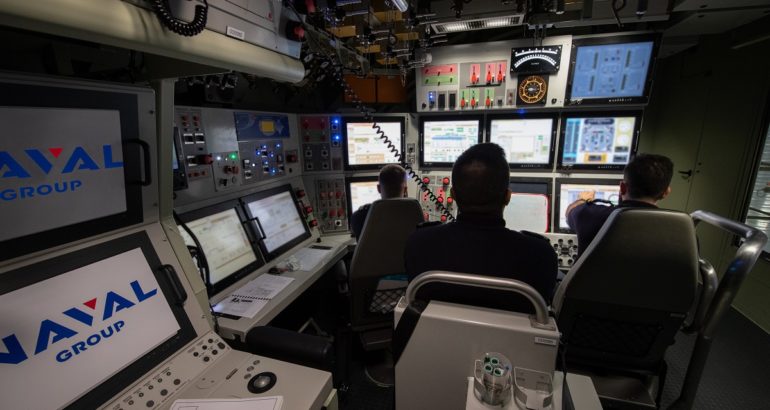 The complex uses several simulators designed and delivered by Naval Group, the builder of the Suffren class and also the designer of the submarine’s combat management system.

Contacted by Naval News, a French Navy public affairs officers explained that the final training of Suffren’s first “Blue” crew started six weeks ago. French Navy SSNs typically use two crews (Red and Blue). With the Blue crew on its way to the Cherbourg shipyard to begin Suffren’ sea trials, the Red crew will take over the simulators and start their own training.

All sailors of the first crew of Suffren already have experience aboard Rubis-class SSNs. The first crew actually consists in a mix of Blue and Red sailors: 63 sailors from the Blue crew and 39 of the future Red crew.

All Suffren-class submarine crews will transit via the training complex dubbed ENSM-BPN (for École de Navigation Sous-Marine et des Bâtiments à Propulsion Nucléaire) for both their formation and pre-deployment training.

The typical formation spans over a period of 4 months to 1 year (depending on the roal aboard the submarine) and covers all aspects of submarine operations: from basic navigation to tactical training (under sea warfare) as well as complex mission planning for land attack operations (a new capability of the Suffren-class thanks to its cruise missile) and damage control. The goal is for the crew to familiarize itself with the environment of the submarine and acquire the right reflexes.

One of the simulators, the dive control room, is a large box placed on a three-axis platform which allows to simulate the trim and roll of the submarine with extreme accuracy, providing the trainees with a “real life” environment. The Ops room (CIC) of a Barracuda type SSN is also available at this land based facility.

The first divergence of the nuclear reactor will take place in December. Suffren will start sea trials in the first quarter 2020. First around Cherbourg (where the first static diving will be conducted), then in Brest area (for deep diving tests) and finally in Toulon area (in the late summer/early fall of 2020) for tests of the weapon systems. Commissioning by the French Navy should take place in late 2020.

For more details about Barracuda type SSN, read our in depth article.