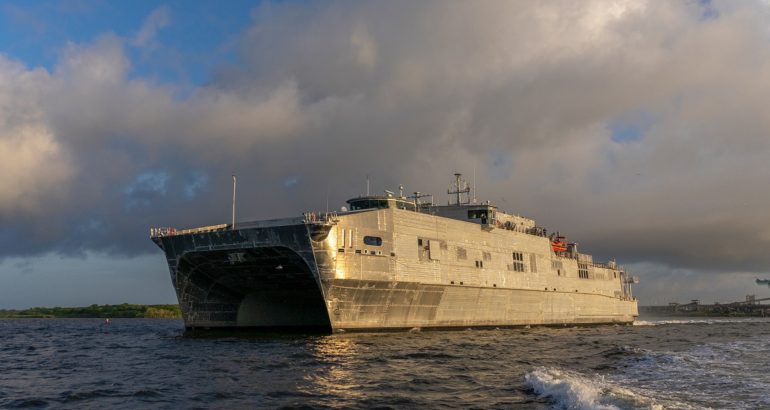 MOBILE, Ala USNS Puerto Rico (EPF 11) successfully completed the first integrated sea trials for an Expeditionary Fast Transport ship Aug. 22. Integrated Trials combine Builder's and Acceptance Trials, allowing for the shipyard to demonstrate to the Navy's Board of Inspection and Survey the operational capability and mission readiness of all the ship's systems during a single underway period. (U.S. Navy photo courtesy of Austal USA Navy/Released.

Austal Limited is pleased to announce that Austal USA has delivered the Expeditionary Fast Transport ship USNS Puerto Rico (EPF 11) to the U.S. Navy during a ceremony aboard the ship at the shipyard in Mobile, Alabama.

In August this year Puerto Rico was the first EPF to perform and successfully complete integrated sea trials – combining builder’s trials and acceptance trials into one at-sea event – returning to port flying a broom at her mast indicating a “clean sweep” of the tests the ship and her crew performed in the Gulf of Mexico.

“Puerto Rico joins the growing fleet of EPFs constructed by Austal USA and proudly serving with the U.S. Navy in locations as diverse as the USA, Middle East and South East Asia,” he said.

“The EPF continues to impress the U.S. Navy and indeed many other navies around the world with the genuine flexibility and operability of the platform.”

The Spearhead-class EPF, a 103 metre high-speed aluminium catamaran, provides high-payload transport capability to U.S. combatant commanders around the world and has quickly become known as ‘the pickup truck’ of the fleet; with 10 EPFs in service, including seven deployed internationally.

The Austal-designed EPF’s large flight deck, open mission bay and habitability spaces provide an opportunity to conduct a wide range of missions – from maritime security operations to humanitarian aid and disaster relief missions. The ship’s flexibility also allows it to support potential future missions such as special operations, command and control, and primary medical operations. With its ability to access small, austere and degraded ports with minimal external support, the EPF provides unique options to fleet and combatant commanders.

In addition to the EPF program, Austal is under contract to build Independence-class Littoral Combat Ships (LCS) for the U.S. Navy. Ten LCSs have been delivered, while an additional six are in various stages of construction.