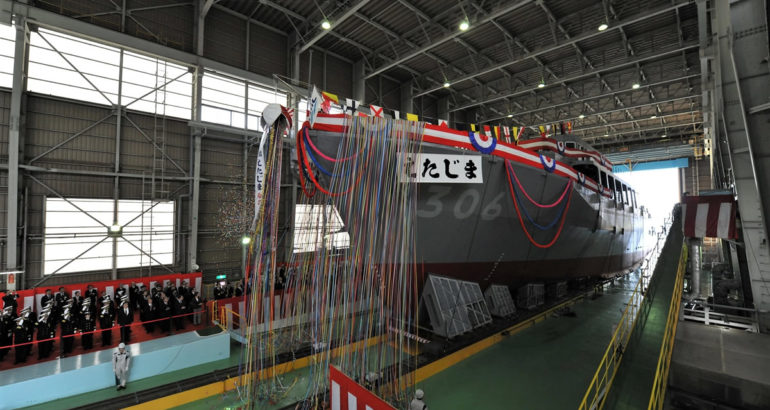 Etajima is the third ship of the Awaji-class minesweeper. Its name comes from an island located in Hiroshima Prefecture, Japan. Etajima island has a JMSDF Officer Candidate School (since the Japanese Imperial Navy era), so it is a very meaningful name for them. Delivery of Etajima to the JMSDF is scheduled for March 2021.

A fourth vessel of the Awaji-class is planned ot be ordered in 2020 according to a MSDF budget request document issued in late August this year.

Etajima is the largest Fiber Reinforced Plastic (FRP) minesweeper in the JMSDF, with a total length of 67 meters, a maximum width of 11 meters, and a standard displacement of 690 tons.

Etajima is equipped with ZQS-4, a sonar for detecting mine laid deep underwater, not just in shallow waters. To blast mines, the vessel uses a new Expendable Mine Disposal System (EMD) by Mitsui E&S. It is remotely controlled using optical fiber cable. In addition, moored mine will be disposed with the JM61 20mm Vulcan gun fitted at the bow of the mine warfare vessel.

Etajima has basically the same equipment and structure as the two existing Awaji-class vessels (Awaji and Hirado), but there is one notable new feature on Etajima: The hull number has been painted with low visibility. This has the effect of making it difficult to identify the vessel’s name at sea and to recognize the presence of the vessel from a distance.

According to Mr. Tomohiro Yamamoto, State Minister of Defense of Japan, in his own twitter on December 13, 2019 (see above), in the future, the vessels of the JMSDF will be switched to low-visibility painting of the name of vessel as well as the hull number.