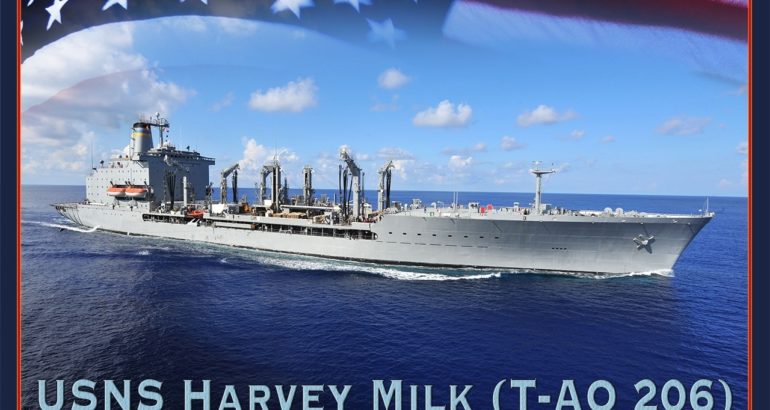 Harvey Milk will be the second John Lewis-class ship, the new generation of US Navy replenishment oilers. The John Lewis-class ships are based on commercial design standards and will recapitalize the current T-AO 187 Class Fleet Replenishment Oilers to provide underway replenishment of fuel to U.S. Navy ships and jet fuel for aircraft assigned to aircraft carriers. These ships are part of the Navy’s Combat Logistics Force and will become the backbone of the fuel delivery system.

“This ship will have significant contributions as part of our Combat Logistics Force, serving as the primary fuel pipeline from resupply ports to ships at sea,. Today’s ceremony marks an important milestone as our Navy works to recapitalize our aging fleet replenishment capabilities, ensuring our warfighters have the resources they need to keep them combat year for years to come.”

Harvey Milk will be operated by the Navy’s Military Sealift Command and is the first ship named after the Navy veteran and civil and human rights leader who became the first openly gay elected official in California when he won a seat on the San Francisco Board of Supervisors in 1977.

GD NASSCO is also in production on the first-in-class Fleet Replenishment Oiler, the future USNS John Lewis (T-AO 205) and is contracted for ships T-AO 207 – 210 as well as the Expeditionary Sea Base platforms (ESB 6-8).