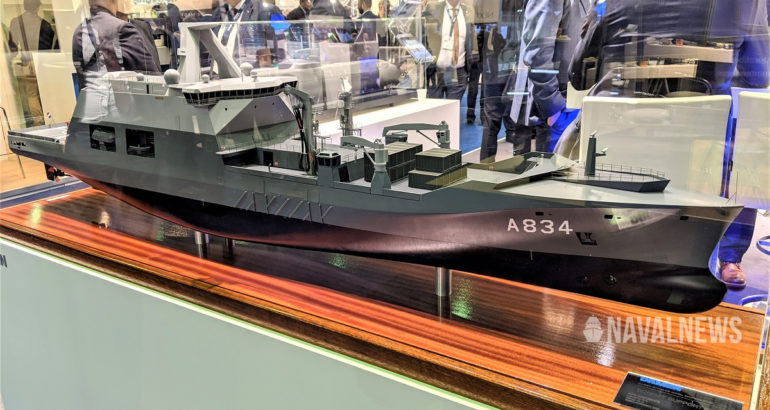 The construction of the new Combat Support Ship (CSS) Zr. Ms Den Helder should start soon. An agreement has been reached between the Dutch MoD and Damen Schelde Naval Shipbuilding on the construction and delivery of a CSS. State Secretary Barbara Visser sent the last required document (D letter) to the Lower House on December 19.

With an additional supply vessel, the Royal Netherlands Navy (RNLN) will have a combat support capability that is almost permanently available thanks to two vessels: The future Den Helder CSS would then supplement the existing Joint Support Ship (JSS) Zr. Ms Karel Doorman.

With more supply capacity, maritime operations at sea, both nationally and internationally, can be sustained for longer according to the Dutch MoD. This increases the effectiveness of both national and combined operations and helps the armed forces to perform their tasks. The ship can be used worldwide and, protected by frigates, can operate under high threat.

In addition, it can be used in the fight against drug trafficking, controlling refugee flows and provide disaster relief.

CSS made in the Netherlands

The Zr. Ms Den Helder design is largely based on Zr.Ms. Karel Doorman. The CSS may not resemble the JSS on the outside, but much is reused on the inside. The CSS is also functionally comparable to the Joint Support Ship. The functions of strategic sea transport and logistical support from the sea (sea basing) are an exception. The CSS is lacking an amphibious warfare capability because its main role is solely replenishment at sea

The fabrication contract is not contracted out in Europe. The Dutch MoD wants to keep the knowledge and skills of designing and building naval ships in the Netherlands. The armed forces thus invoked Article 346 of the Treaty on the Functioning of the European Union. It states that Member States may protect essential security interests. This also relates to the production of defense equipment.

The nearly 200-meter-long ship will have a 75-person crew and can also take an additional 75 people on board. The design can accommodate several helicopters and around 20 ISO containers. The construction cost of 375 million Euros is almost € 50 million higher than previously calculated. This is partly due to new standard requirements and developments in marine construction, energy, the environment and safety.

For example, the design has now explicitly looked at fuel consumption and exhaust emissions. The combination of diesel engines, hull shape and propeller design reduces fuel consumption by around 6 percent compared to the Karel Doorman JSS.

During NEDS 2019, Damen was showcasing a scale model of the CSS (pictures above) featuring the following dimensions: