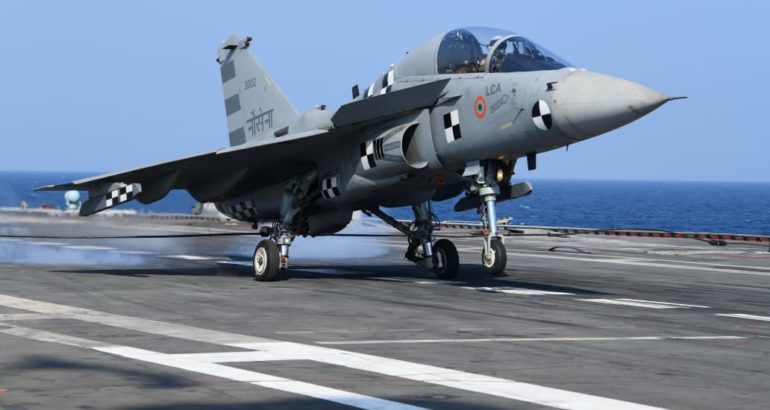 The developmental LCA (N) MK1 achieved an important milestone on 11 Jan 20 with the successful Arrested Landing on board the naval aircraft carrier INS Vikramaditya.

The aircraft was piloted by Commodore JA Maolankar who also undertook the maiden Ski Jump Take-Off from the carrier today – 12 Jan 20.

A Technology Demonstrator, LCA (Navy) has earlier been successfully tested during extensive trials at the Shore Base Test Facility at the Naval Air Station at Goa.

With the completion of this feat, the indigenously developed niche technologies specific to deck based fighter operations have been proven which will now pave the way to develop and manufacture the Twin Engine Deck Based Fighter for the Indian Navy, which is expected to proudly fly from the aircraft carriers by the year 2026.

This landmark event demonstrates the professional commitment and synergy between various agencies including ADA, HAL, CEMILAC and Indian Navy in harnessing the potential of our scientists, engineers and naval flight testing community towards meeting the expectations of the nation.