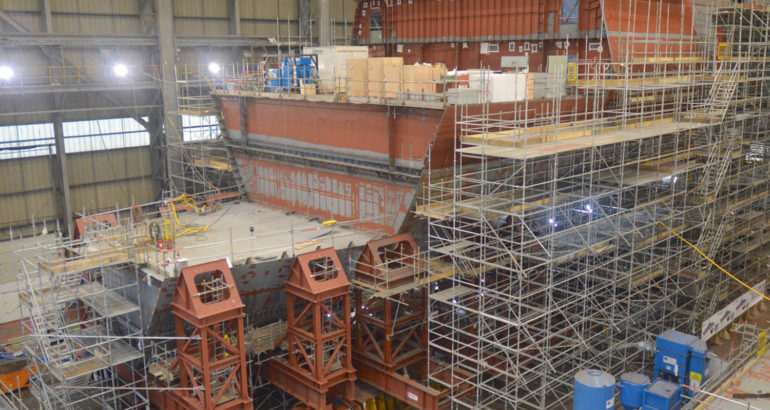 HMS Glasgow – the first of the Royal Navy’s Type 26 frigates – is now more than half-way through construction at BAE Systems Govan shipyard.

The next generation frigate is being built in numerous sections, or ‘units’, with the fore and aft sections of the 8,000-tonne warship being built separately. From there, once complete, the units are wheeled to the ship block and outfit hall where they are joined together and pipes and cabling linked up.

Just over half of HMS Glasgow is now complete or under construction, out of eight planned vessels in the class (all are named, three have been ordered, two are in build at Govan – HMS Cardiff is No.2).

Once the fore and aft sections are complete they will be joined on the hard in front of the block hall, before the bridge/main mast are craned into place.

The completed ship will then be ‘launched’ by being lowered into the Clyde via a barge, then towed downstream to BAE’s yard at Scotstoun to complete fitting out.

Each Type 26 will be equipped with a range of capabilities including the Sea-Ceptor missile defence system, a 5-inch medium calibre gun, an embarked helicopter, medium range radar, powerful bow and towed array sonars, helicopter-launched torpedoes and a design which makes them extremely difficult for enemy submarines to detect. They will be designed for joint and multinational operations across the full spectrum of warfare, including complex combat operations, counter piracy, humanitarian aid and disaster relief work.

Its flexible design will also allow its weapon systems to be adapted throughout its lifespan to counter future threats. The Type 26 benefits from the latest advances in digital technologies, including 3D and virtual reality, which ensures that the ship’s design is refined earlier in the process.

The first Type 26 warship, HMS Glasgow, will enter service in the mid-2020s. Designed for a service life of at least 25 years, the Type 26 frigates will serve in the future Royal Navy surface fleet into the 2060s. Both Australia and Canada have now chosen the Type 26 design as the baseline for their respective warship programmes.

The Type 26 manufacture Batch 1 contract was signed in June 2017. This will deliver the first three ships to the Royal Navy and includes the necessary modifications to the Govan and Scotstoun shipyards. The procurement of Batch 2 will be subject to a separate approval and contract which is expected to be awarded in the early-2020s

In addition to the Royal Navy, export variants of the Type 26 have already been selected by the Royal Australian Navy (Hunter-class) and Royal Canadian Navy (CSC).