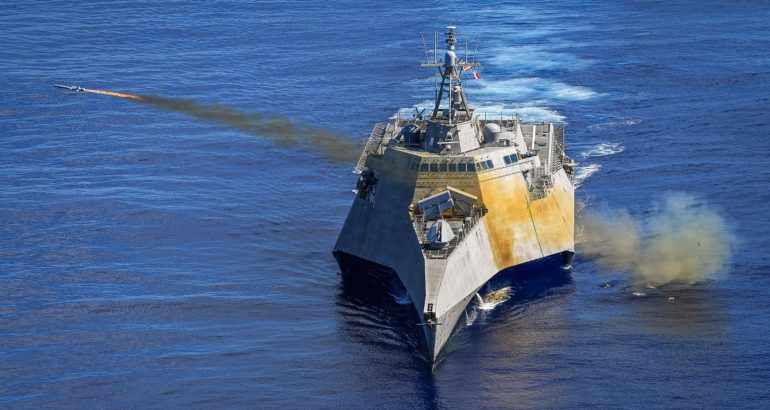 The over-the-horizon Naval Strike Missile system was installed and integrated onto the LCS by a team from General Dynamics Mission Systems and Austal USA.

“The integration of the Naval Strike Missile system onto the Independence-class LCS was an example of what a small team of highly talented people can do in a very short time. Working closely with the Navy and Austal USA, General Dynamics engineers were responsible for the technical design and integration of the weapon system onto the ship which involved developing software, installing the system, and performing fratricide and other safety analysis.”

“Today was a terrific accomplishment for USS Gabrielle Giffords crew and the Navy’s LCS class. I am very proud of all the teamwork that led to the successful launch of the Naval Strike Missile (NSM)”

The Naval Strike Missile is a new long-range, precision-strike weapon that can find and destroy enemy ships at distances up to 100 nautical miles. Produced by Raytheon, the missile skims the surface of the water and is so accurate that LCS crews can pinpoint which part of the enemy ship to destroy using the ship’s integrated combat system.

As the lead integrator for the Independence-variant LCS systems, the team of engineers from General Dynamics were responsible for:

They also worked closely with the Austal USA team which installed the Naval Strike Missile system’s structures and foundations onto the USS Gabrielle Giffords.

his was the first time an integrated Naval Strike Missile was launched on a deployed Littoral Combat Ship.

Ed Cook, Director of Surface Ships at General Dynamics Mission Systems, explained how integrating the new missile system presented unique challenges to the team. “This is a brand new weapon system being introduced on the LCS, so we were experiencing the first for everything. One of the most challenging aspects was performing the software development and mechanical integration of the weapon because there was no available system to test with and verify our solution. We had to work closely with the missile provider (Raytheon) and used tech manuals that were still in development. We created simulators to reduce integration risks, but the only opportunity to fully verify our solution was aboard the LCS when everything came together for the first time.”

The Naval Strike Missile system integration had to be completed on a tight deadline because the USS Gabrielle Giffords was scheduled for a deployment which required the new powerful over-the-horizon missile. To meet the short timeline, General Dynamics tapped a diverse team of systems engineers, software engineers, hardware engineers and mechanical engineers from across our Pittsfield, Massachusetts and San Diego, California facilities. The team included various levels of experience, from senior professionals to those with just a few years of experience, and they used an Agile approach to complete the project on time. Most importantly, the entire team was committed to delivering the new missile system to the sailors on board LCS 10 quickly and safely.

“The Naval Strike Missile integration project is an example of how our Navy customer and industry can work together closely to quickly make significant improvements and provide game-changing capability to our sailors,” said Stan Kordana. “We had a high performing team of engineers working on this project who have diverse skill sets and levels of experience. When they encountered challenges, they always tackled them with a positive attitude and collaborated on the best approach to solve the problem and meet the deadline. Everyone knew it was about the mission. This team completely understood the fact that the Navy needed the USS Gabrielle Giffords to deploy with this weapon system, and they got it done.”

In addition to the USS Gabrielle Giffords, General Dynamics will serve as the prime contractor for the integration and installation of the Naval Strike Missile system on all Independence-variant LCSs already in service. This is the first of many upgrades that Navy has planned for the LCS in the upcoming years.

“LCS packs a punch and gives potential adversaries another reason to stay awake at night. We are stronger when we sail together with our friends and partners, and LCS is an important addition to the lineup.”

About the Independence-Variant Littoral Combat Ship

General Dynamics is the Independence-variant LCS systems integrator, responsible for the design, integration and testing of the navigation, command, control, computing, and aviation systems on each ship. LCS ships are designed to be agile, mission-focused platforms capable in operating in near-shore and open-ocean environments. They are designed to defeat asymmetric anti-access threats such as mines, quiet diesel submarines and fast surface craft.