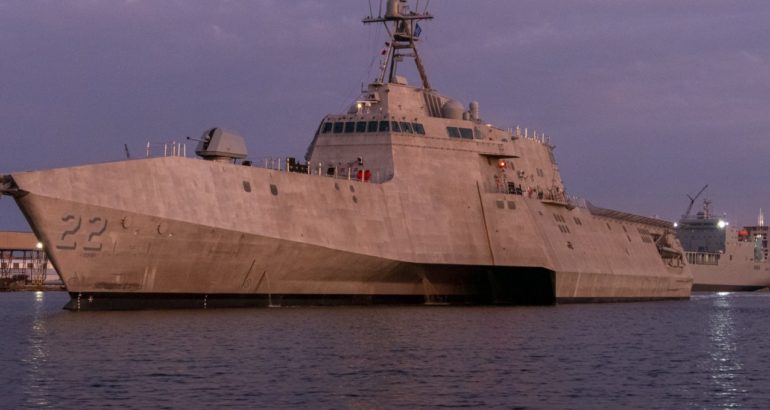 Austal USA has delivered its 11th Littoral Combat Ship (LCS) to the U.S. Navy at the company’s shipyard in Mobile, Alabama.

The future USS Kansas City (LCS 22) is the first Independence-class LCS to be delivered by Austal USA in 2020.

“Austal USA’s delivery of the Independence-class LCS program continues to impress, with quality, cost and productivity improvements being achieved with each new vessel. We have now delivered 11 of the 19 Independence-class LCS currently contracted and it’s very pleasing to see more and more of these ships deployed around the world, adding great capability to the U.S. Navy”

Five Independence-class Littoral Combat Ships (small surface combatants) are under various stages of construction at Austal USA including the future USS Oakland (LCS 24) and USS Mobile (LCS 26) that are preparing for sea trials. Assembly is underway on the future USS Savannah (LCS 28) and USS Canberra (LCS 30), and modules for the future USS Santa Barbara (LCS 32) are under construction in Austal’s module manufacturing facility (MMF). Three more LCS are under contract and scheduled for production, through to LCS 38.

The Independence-class LCS is a fast, agile, focused-mission platform designed for operation in near-shore environments yet capable of open-ocean operation.

Austal USA is also under contract to build 14 Expeditionary Fast Transport vessels (EPF) for the U.S. Navy. The company has delivered 11 EPFs, while an additional two are in various stages of construction at the Mobile, Alabama shipyard.