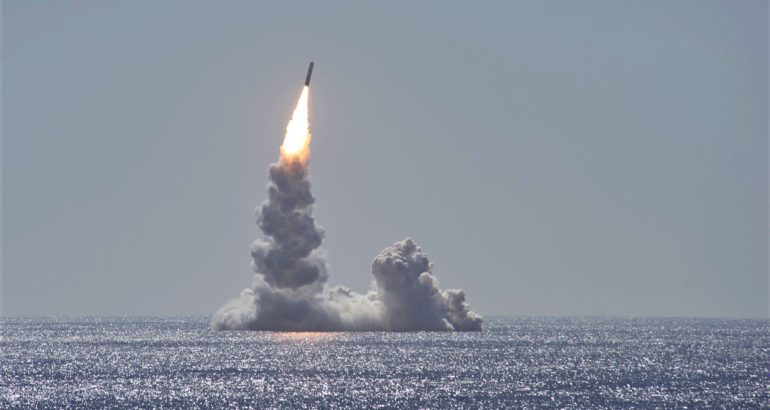 This was part of a Demonstration and Shakedown Operation, designated DASO-30. The primary objective of a DASO is to evaluate and demonstrate the readiness of the SSBN’s strategic weapon system and crew before operational deployment following the submarine’s engineered refueling overhaul.

“The professional performance by the crew of the USS Maine today demonstrated they are ready to stand the watch for our nation’s strategic deterrence mission. They, and the acquisition and sustainment teams that support them, showed the teamwork, commitment, and attention to detail needed to continue to provide the undersea strategic deterrence for our nation, just as the Navy has done uninterrupted for the last 60 years.”

James F. Geurts, assistant secretary of the Navy for research, development and acquisition who embarked USS Maine for the launch.

“Today’s test demonstrates the continued reliability of our sea-based nuclear deterrent, which is made possible by our sailors, civilians and industry partners who bring expertise and dedication to the mission that is unmatched by any other country,” said Vice Adm. Johnny R. Wolfe, director of the Navy’s Strategic Systems Programs. “These same teams are now developing the next generation of the Trident strategic weapon system, which will extend our sea-based deterrent for the next 40 years.”

The Trident strategic weapon system is highly accurate and reliable. The Trident II (D5) missiles recently underwent a life extension program to address potential impacts from aging and obsolescence. The life-extended missiles – Trident II (D5LE) – are now being deployed to the Fleet and will serve for the remaining service life of U.S Ohio-class and United Kingdom Vanguard -class SSBNs, and as the initial loadout for the U.S. Columbia-class and U.K. Dreadnought-class SSBNs.

The Navy’s last DASO was in May 2019 off the coast of Cape Canaveral, Florida, from USS Rhode Island (SSBN-740). The Navy’s most recent flight test – a Commander’s Evaluation Test – was a series of four launches from USS Nebraska (SSBN-739) in September 2019 off the coast of Southern California. All five of these 2019 flight tests were of the life-extended Trident II (D5LE).

Flight test missiles are not armed. Safety of the public and the crew conducting the mission is paramount. Today’s launch was conducted from sea, the missile flew over the sea, and landed in the sea. At no time did the missile fly over land.

The missile test was not conducted in response to any ongoing world events or as a demonstration of power. Test launches – including DASOs – are scheduled years in advance.

SLBMs are the sea-based leg of the nation’s strategic nuclear deterrent Triad that also includes the U.S. Air Force’s intercontinental ballistic missiles (ICBM) and nuclear-capable bombers. Each part of the Triad provides unique capabilities and advantages.

The sea-based leg makes up the majority – approximately 70 percent – of the U.S.’s deployed strategic nuclear deterrent Triad. The SLBM is the most survivable leg of the triad, provides a persistent presence, and allows for flexible concepts of operations.