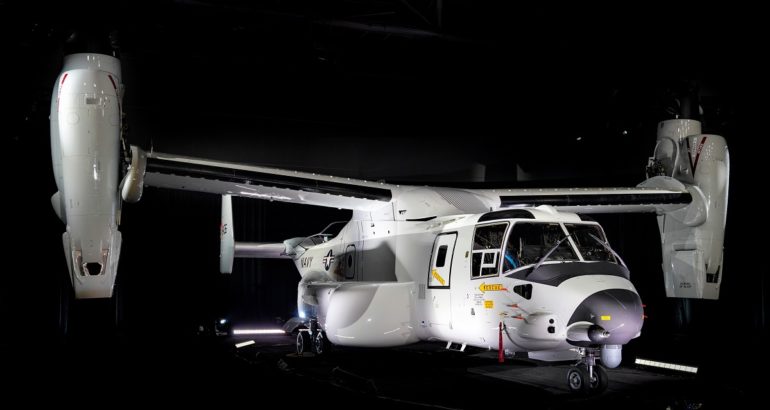 The U.S. Navy selected the Bell Boeing CMV-22B Osprey to replace the C-2A Greyhound fleet for its carrier onboard delivery mission of transporting personnel and high-priority cargo from shore bases to aircraft carriers at sea.

“The CMV-22 Osprey brings expanded capabilities not only to the Carrier Onboard Delivery (COD) mission but to the high-end fight. We are anxious to get it to the fleet and show off its immense capabilities and agile flexibility.”

The CMV-22B is unique in the Osprey family with the ability to carry up to 6,000 pounds and cover more than 1,150 nautical miles. It is the only aircraft that can land on the flight deck of an aircraft carrier with the F-35C engine power module safely secured inside its fuselage and provide roll-on/roll-off delivery. Expanded sponsons increase fuel capacity and enable the CMV-22B to provide enhanced logistical capability anywhere in the world.

The CMV-22 completed several milestones leading to the first reveal ceremony. The CMV-22B accomplished its first flight in December 2019 and on Feb. 2, the first developmental test model arrived at Naval Air Station Patuxent River, MD to continue developmental testing. Over the last several months, the Navy and Marine Corps team has been working and training together at MCAS Miramar in preparation for CMV-22 deliveries.

“Navy maintainers and aircrew have embedded in multiple squadrons within Marine Aircraft Group (MAG) 16, with significant benefit to both Navy personnel and our squadrons. This integration has been so successful, and created such a tight-knit team, that we currently have members of the upcoming Navy squadron integrated into one of our forward-deployed units,” said U.S. Marine Corps Col. Eric Garcia, MAG-16 commanding officer. “This clearly demonstrates the professionalism and dedication by all members of the “Blue and Green” team and bodes well for further integration of Navy and Fleet Marine Forces as we prepare to employ the CMV-22’s vast capabilities at home and abroad.”

The U.S. Navy selected the Bell Boeing V-22 Osprey to replace the C-2A Greyhound fleet for its carrier onboard delivery mission of transporting personnel and high-priority cargo from shore bases to aircraft carriers at sea. The CMV-22B will initially be based at Naval Air Station North Island in San Diego and later at Naval Air Station Norfolk.