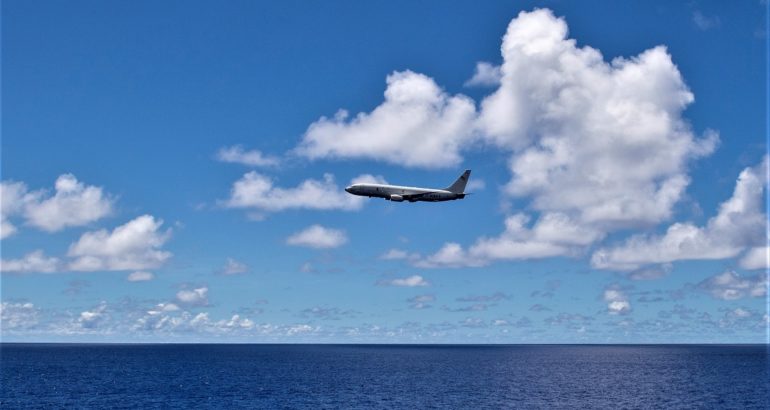 The destroyer seems to be Type 052D / Luyang III-class Destroyer “Hohhot” ( 呼和浩特 ) of the People’s Liberation Army Navy. The Type 052D Kunming-class (Nato designation: Luyang III) is one of the latest generation of guided-missile destroyer (DDG) of the Chinese Navy.

According to the U.S. Navy, the P-8A was operating in international airspace in accordance with international rules and regulations. In its statement, the U.S. Navy’s Pacific Fleet qualified the PRC navy destroyer’s actions as being “unsafe and unprofessional”. The statement added:

Additionally, these acts violate the Code for Unplanned Encounters at Sea (CUES), a multilateral agreement reached at the 2014 Western Pacific Naval Symposium to reduce the chance of an incident at sea. CUES specifically addresses the use of lasers that could cause harm to personnel or damage to equipment. The destroyer’s actions were also inconsistent with a Memorandum of Understanding (MOU) between U.S. Department of Defense and the Ministry of National Defense of the PRC regarding rules of behavior for safety of air and maritime encounters.

The laser, which was not visible to the naked eye, was captured by a sensor onboard the P-8A. Weapons-grade lasers could potentially cause serious harm to aircrew and mariners, as well as ship and aircraft systems.

The P-8A is assigned to VP-45, based out of Jacksonville, Florida, and is forward-deployed to Kadena Air Force Base in Okinawa, Japan. The squadron conducts routine operations, maritime patrol and reconnaissance in the U.S. 7th Fleet area of operations.

U.S Navy aircraft routinely fly in the Philippine Sea and have done so for many years. U.S. Navy aircraft and ships will continue to fly, sail and operate anywhere international law allows.

Hohhot is China’s tenth Type 052D Destroyer. It was commissioned with the People’s Liberation Army Navy (PLAN or Chinese Navy) on 12 January 2019. The vessel joined the 2nd Destroyer flotilla of the PLAN South Sea Fleet, 747 days after its launch at the Jiangnan Changxing Shipbuilding and Heavy Industry Corporation (Jiangnan-Changxing) in Shanghai (a member of China State Shipbuilding Corporation CSSC).