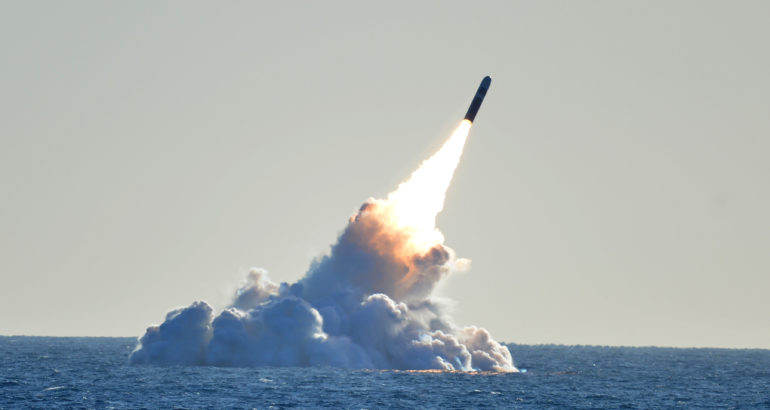 The U.S. Department of Defense on Feb. 4 confirmed in a statement that U.S. Navy had fielded W76-2 low-yield submarine-launched ballistic missile (SLBM) warhead, adding that this capability would strengthen deterrence and support U.S. commitment to extended deterrence.

A Jan. 29 article on the website of Federation of American Scientists first reported that the Ohio-class ballistic missile submarine U.S.S. Tennessee (SSBN-734) had deployed W76-2 warhead on a small portion of its SLBMs, and the submarine conducted a deterrent patrol in the Atlantic Ocean starting at the end of 2019.

According to the FAS, only one or two of the 20 missiles on the USS Tennessee and subsequent subs will be armed with the W76-2, either singly or carrying multiple warheads. The remaining 18 missiles on each submarine like the Tennessee carry either the 90-kiloton W76-1 or the 455-kiloton W88.

The W76-2 thermonuclear warhead is a modification of the pre-existing W76-1 warhead, and the former is estimated to have an explosive yield of about five kilotons.

The US Department of Energy’s National Nuclear Security Administration (DOE/NNSA) completed the First Production Unit (FPU) of the W76-2 warhead in Feb. 2019 at the Pantex Plant in Amarillo, Texas.

« This supplemental capability strengthens deterrence and provides the United States a prompt, more survivable low-yield strategic weapon; supports our commitment to extended deterrence; and demonstrates to potential adversaries that there is no advantage to limited nuclear employment because the United States can credibly and decisively respond to any threat scenario, » the Under Secretary of Defense for Policy, John Rood, stated on Feb. 4.

The Pentagon statement also refers to 2018 Nuclear Posture Review, in which the US DoD identified the requirement to “modify a small number of submarine-launched ballistic missile warheads” to address the conclusion that potential adversaries, like Russia, believe that employment of low-yield nuclear weapons will give them an advantage over the United States and its allies and partners.