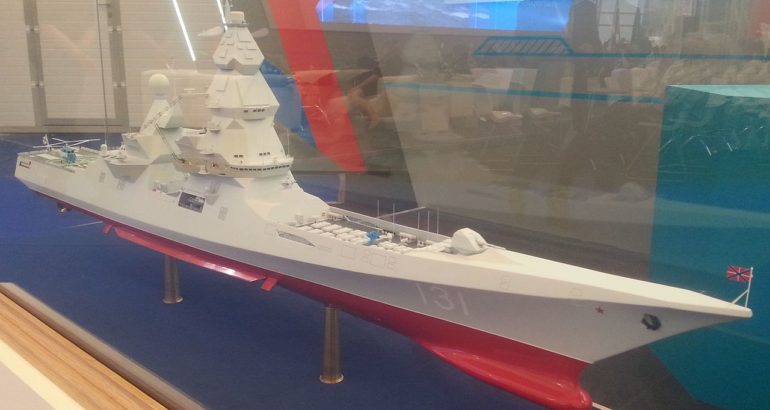 A model of Project 23560 destroyer at the «ARMY-2015» military-technical forum. Picture by Artem Tkachenko

Which Future Destroyer for the Russian Navy ? – Part 2

The main missions of big-displacement warships armed with a major number of missiles is to provide air defense to warship formations and deliver missile strikes at sea and coastal targets.

The available cruisers and destroyers properly cope with the first mission. Ticonderoga and Arleigh Burke of IIA series of the US Navy differ a little (the former has a quarter more cells) and are assigned to an aircraft-carrying attack force in a proportion of 1/3 or 2/2. In World War Two, the air defense of US warship groups in the Pacific theater of warfare (beginning from Santa Cruz) was provided by cruisers and destroyers and was based on new speed battleships with centralized control of antiaircraft fire and a major number of guns (20 127mm and 80 40mm).

Today it would be also appropriate for the USA and Russia to have one or two air defense leaders in each aircraft-carrying force comprising, besides the aircraft carrier, 4-6 surface warships. Such leaders armed with powerful radars and multirole control systems, a big arsenal of long, medium and short-range antiaircraft missiles would provide an umbrella over the formation which is impenetrable for any air attack.

The concept of the Krylov center presented at Army-2015 forum envisages a big number of antiaircraft missiles in 56 cells of the vertical launchers — 12×4 in the bow and 2×4 in the stern (short-range 9M100 and 9M331 are not considered). It is possible that 32 cells will be occupied by super long-range 40N6 and the remaining 24 — by long-range 9M96D and medium-range 9M96 missiles. It provides the necessary number of antiaircraft missiles to ensure zonal defense of an aircraft-carrying or an attack force of warships. It was reported that project 22350M warships will have a hundred missiles in Poliment-Redut launchers and 40-48 of them are likely to be short-range 9M100.

The firepower of a destroyer (cruiser) leading an attack force will dominate by a third the capabilities of subordinated warships. However, the firepower of one project 23560 or two project 22350M warships is anyway impressing — 120 Kalibr 3M-14 missiles or Onix antiship 3M-55 (on condition that a fourth of cells is occupied by 91RT missiles and 28 3M-55 or 3M-14 just in case). The main role of the leader remains to be the nucleus of the zonal air defense.

The first reports on the construction of a new shipbuilding facility at Severnaya verf Shipyard appeared in early 2017. Google Earth images provide the construction pace. It became active in 2019, however it would be too optimistic to expect the completion in the end of 2020. It is likely to happen in the second half of 2021 when the technical design of project 22350M has to be completed. There are all grounds to believe that the first warships built in the new slipway would belong to project 22350M. They will be 160 meters long and can be built in the available slipway which is fit for 170-meter long ships. However, all the slipways will be occupied by four upgraded project 22350 warships.

The size of the two-span slipway (250×140 meters) allows laying two 22350M in one span. The other span is likely to build a civilian vessel. The laying of one or two 23560 in the military part of the slipway can take place after the first pair of 22350M is floated presumably in 2025. The adjustment of the rough design which was completed in 2016 and the technical design of project 23560 should begin two years before the mentioned time.

Big destroyers (cruisers) are necessary both to maintain the prestige of the Russian Navy and to ensure combat sustainability of formations. High costs and technical sophistication do not allow building a big number of warships. It would be reasonable to have six warships of project 23560, three for the Northern and Pacific fleets each. The permanent presence in the World Ocean would be ensured by one warship from each of the two main fleets. There should be more frigates (destroyers) of project 22350M — 12 warships in each of the same fleets. Thirty multirole green-water warships by 2050 is an accomplishable dream which the Russian economy and shipbuilding industry can afford, expert Alexander Shishkin writes in his blog.