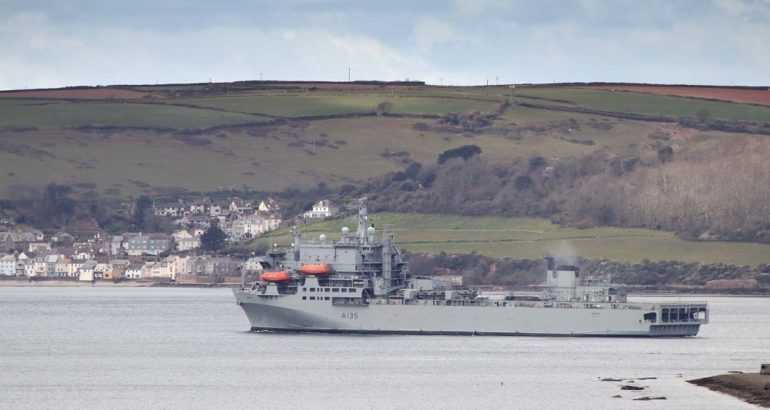 RFA Argus deploying in support of COVID 19. RFA Argus has set sail for the Caribbean in preparation to support the British Overseas Territories during the upcoming hurricane season and will be able to support the response to the Covid-19 pandemic if required.

RFA Argus has set sail for the Caribbean in preparation to support the British Overseas Territories during the upcoming hurricane season and will be able to assist with the response to the Covid-19 pandemic if required.

RFA Argus’ deployment to the Caribbean had been scheduled for the hurricane season, but she will now be able to play a part in ensuring the UK Government is ready to support the Overseas Territories during the pandemic..

As Royal Navy sailors and Royal Marines continue to stand ready to assist the United Kingdom in its efforts to defeat the pandemic at home, the support ship left Devonport today to cross the Atlantic and head south for the Caribbean.

“RFA Argus’ ship’s company, consisting of both Royal Fleet Auxiliary and Royal Navy personnel, will rise to this challenge. We understand that there are people in need in the UK Overseas Territories who require our support.”

“The Armed Forces are taking decisive and coordinated action both at home and overseas to respond to the Covid-19 outbreak. The Royal Navy and Royal Fleet Auxiliary have worked hard to ensure that RFA Argus is ready for the hurricane season in the Caribbean and now also able to support the UK’s Overseas Territories during the pandemic.

A medical team could later join Argus in the Caribbean to support the UK Government’s contribution to responding to Covid-19 in Overseas Territories.

For the record, the Marine Nationale, US Navy and Armada Española have all dispatched vessel on Covid-19 support missions.

RFA Argus has a length of 175 metres for a displacement of 18,280 tonnes and a crew complement of 80 sailors. RFA Argus’ primary role is to serve as a Primary Casualty Receiving Ship. She has a fully equipped 100 bed hospital including a 4 bay operating theatre with a 10 bed Critical Care Unit, a 20 bed High Dependency Unit and a CT Scanner. Her secondary role is to provide aviation training facilities.

RFA Argus is fitted with self-defence weaponry and decoys to protect herself and her crew from harm. Because of this, and the fact that she may have operational units embarked, under the Geneva Convention she can’t be classified as a hospital ship and does not display the International Red Cross symbol.

Argus was formerly the container ship MV Contender Bezant. The ship was requisitioned in 1982 for service in the Falklands War and purchased outright in 1984 for use as an Aviation Training Ship,