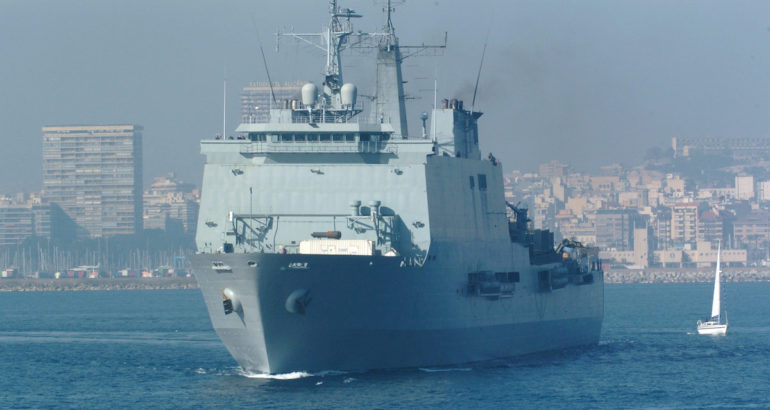 The Spanish Ministry of Defence has asked the Spanish Navy (Armada Española) to activate the Galicia (L51) landing platform dock (LPD) to support the medical capability of the autonomous city of Mellila in the fight against the Covid-19 epidemic.

« It will take us only 24 hours to mobolize the crew, and once at sea, the ship will need between 4 and 6 hours to sail from its naval base in Rota to Mellila, »

While the Galicia-class LPD main mission is to conduct amphibious operations, its role includes peacekeeping operations and humanitarian and disaster relief through medical and surgical support with an operating room and intensive care unit. The two ships of the class, the Galicia and Castilla, have an hospital capacity of 10 and 12 beds. The Castilla can receive up to 105 extra beds for minor patients because the ship is specially designed to serve as a command ship to the detriment of amphibious capabilities, which are more advanced on the Galicia.

The Spanish Navy does not have hospital ships as such, although there are two hospitalized ships in Spain. These are the medical and logistics support vessels Esperanza del Mar and Juan de la Cosa medical and logistics support vessels, which are operated by the ISM (Social Institute of the Navy). All major Spanish Navy warships come with a health unit onboard which size varies according to the ship’s own size and function.

In addition to the Galicia and Castilla LPDs, the Spanish Navy has three others ships capable to provide health support :

For the record, it was announced last week that French Navy Mistral-class LHDs Mistral and Dixmude will be deployed to Reunion Island and the Caribbean in support of the Coronavirus relief efforts while the U.S. Navy has deployed its two hospital ships to New York and Los Angeles.