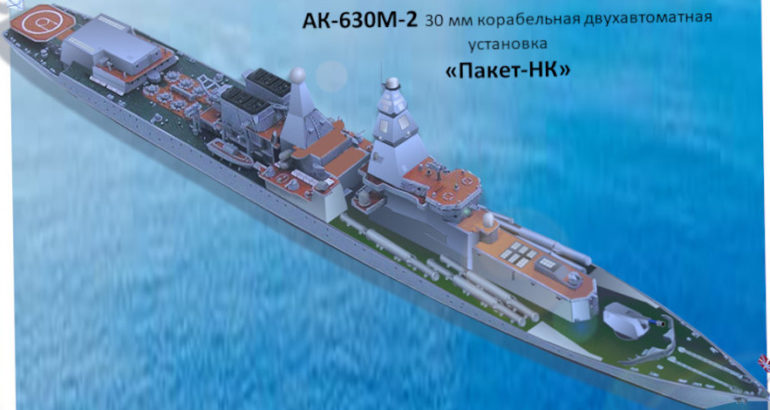 The upgraded Pr.1164M will include an impressive array of new weapons, surpassing the planned Pr.23560 Lider Class nuclear cruiser.

The most visible difference is that the 16 P-1000 Vulcan (NATO: SS-N-12 SANDBOX) anti-ship missiles are replaced by 6 Poseidon Intercontinental Nuclear-Powered Nuclear-Armed Autonomous Torpedoes.This will be the first reported use an a surface vessel. Other weapons include hypersonic missiles and land attack cruise missiles. There is also a new air-defense complex consisting of both S-500 and S-350, and a rail gun.

Details of the electronics fit were not discussed but the accompanying poster appears to show phased array radars. These are mounted in an integrated mast similar to the Lider design. This upgrade should improve the stealth of the design.

The new artillery appears to be a rail gun, possibly the Turkish Şahi-209 model. A closer defense relationship between the two countries could indicate trade offsets. Russia is supplying the S-400 and S-500 SAM systems, and Turkey the rail gun technology.

All three active SLAVA Class vessels will be upgraded. They will act as flagships for carrier hunting task forces in Russia’s new Hybrid Hyper-warfare doctrine which relies heavily on new super weapons.

The upgraded ships will receive the NATO designation ZUMVALTSKI Class.

Edit – 2 April 2020: This was obviously an April’s Fool article. We hope you enjoyed it.