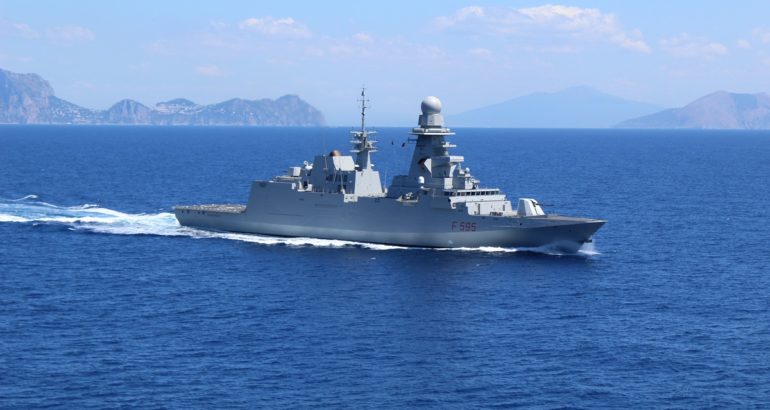 The Italian Navy (Marina Militare) dispatched for the first time one of its FREMM Frigates to patrol the Gulf of Guinea while the French Navy (Marine Nationale) suspended its maritime security mission off West Africa.

For the first time the French Navy has suspended its permanent Mission Corymbe off West Africa due to the COVID-19 epidemic and withdrawn a vessel from the area.

The patrol vessel Lieutenant de Vaisseau Le Henaff, which started a scheduled deployment in early March for Mission Corymbe, returned to France at the end of the month.

Corymbe foresees the permanent presence of at least one ship in the Gulf of Guinea to protect French interests in the area (80,000 French nationals) and contribute to the maritime security in the area. Vessels taking part in the mission have also carried out anti-piracy patrols and counter drug operations.

Meanwhile, and likely to fill this gap in the Gulf of Guinea, the Italian navy has deployed the FREMM Frigate Luigi Rizzo to the area. According to the Italian Navy, the frigate role in the area is to safeguard the freedom of navigation and the protection of national interests. It has also been tasked for the purpose of the European Union’s action in support of maritime safety.

Italian Navy (Marina Militare) and the European Union are united in promoting security in the Gulf of Guinea.

“Given the possible developments in terms of maritime security and the potential direct and indirect consequences for national interests, the Navy has over the years developed a significant awareness of the dynamics present in the Gulf of Guinea, as well as attention to the critical issues and opportunities of the region, through a constant commitment both in the field of international cooperation and in the enabling capacity building sector.

In this context, the deployement of the Rizzo Luigi ship to the area was planned, within which a program of training activities was launched with French and Spanish naval assets already present in the area, also developing initiatives to directly support the national merchant traffic. in the area, in order to provide tangible feedback to the repeated requests of the Italian shipowner (CONFITARMA and ASSOARMATORI) and collaboration activities with the Offshore platforms (ENI).”

Update: The Rizzo Luigi intervened in support of a Greek bulk carrier under piracy attack on March 25th, 2020.