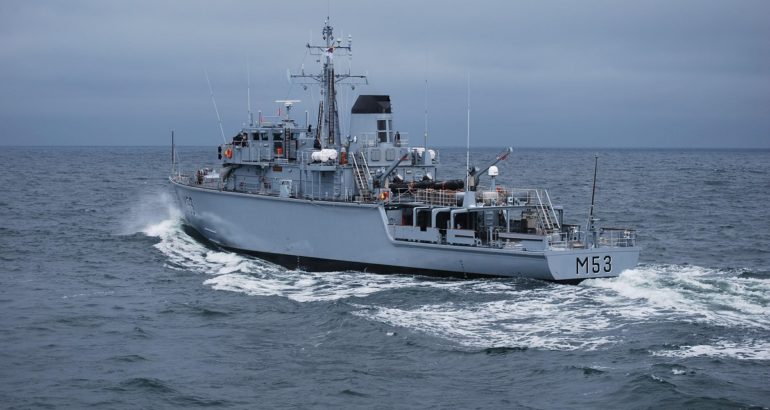 The Lithuanian Navy (Lietuvos Karinės jūrų pajėgos) is looking to expand its fleet of Skalvis-class Mine Counter Measures (MCM) vessels (ex-Royal Navy’s Hunt-class) with the procurement of a third hull to be overhauled and upgraded.

“The Lithuanian Navy is looking to expand its fleet of Hunt Class Mine Counter Measures Vessel (MCMV) via procurement of a legacy hull from the Royal Navy and regeneration of said hull to an agreed operational state, closely aligned to the Lithuanian Skalvis Class vessels currently in service with the Lithuanian Navy. The Vessel will utilise the Sonar 2193 and the M-CUBE Mine Countermeasure Management System. The scope of this project is for a single entity to deliver the regenerated vessel, with stated mission and sonar systems to an agreed operational condition. Prior to award of the contract, ownership of the vessel will pass to LTU. DESA is the contracting authority that will procure and enter into the contract. Immediately upon signature, the contract shall be novated to the Lithuanian Ministry of National Defence (LTU Defence Materiel Agency). From this point, LTU MND will become the contracting authority.”

The Lithuanian Navy acquired 2 Hunt-class MCM Vessels from the United Kingdom in 2008: M53 Skalvis (Ex-HMS Cottesmore) and M54 Kuršis (Ex-HMS Dulverton). Both were commissioned in 2013.

The Royal Navy decommissioned two Hunt-class vessels in December 2017: HMS Atherstone and HMS Quorn. These two vessels are the most likely candidates for the Lithuanian Navy requirement.

Update: The UK MoD’s DE&S announced via a press release published on 30 April 2020 that the former HMS Quorn will be transferred to Lithuania.

About Hunt-class Mine Counter Measures Vessel

The Hunt-class MCMV is a 725 tons vessel specialized in active mine hunting built by Vosper Thornycroft and Yarrow Shipbuilders Limited for the Royal Navy from 1979. Of the 13 vessels built, 10 remain in service today. The Greek and Lithuanian navy each have two vessels in their fleet.

The vessels were originally equipped with two ECA Group PAP 104 mk3 remotely controlled mine disposal vehicles for the identification and disposal of mines and Seafox C expendable mine-disposal vehicle. In Lithuanian Navy service however, these ships are now likely fitted with the more modern K-STER by ECA Group. The Hunt-class is fitted with an Easytrack subsea acoustic tracking system which is integrated as part of the Seafox mine disposal system.

The Hunt-class surface warning and navigation radar is the Kelvin Hughes Type 1007 naval radar operating at I-band and is equipped with the Thales Sonar 2193 hull-mounted wide band sonar.

The mine counter measure vessel is manned by a crew of 47 sailors. The weapons suite consists in a single 30mm DS30M Mark 2 gun, 2 miniguns and 3 general purpose machine guns.

Thanks to its weapons and sensor systems, the Hunt-class can combine both mine warfare and maritime patrol missions.

About M-CUBE Mine Countermeasure Management System

The M-Cube is a MCM management system designed by Thales. It comes with modern MCM Command & Control capabilities with dedicated algorithms: MCM doctrine and tactics implementation along with performance prediction and evaluation improvements (multi-path, real time, and incremental).

M-Cube has been selected by the navies of India, Lithuania and Singapore.